You are here: Products Big Boy Pond by J.P. Hall 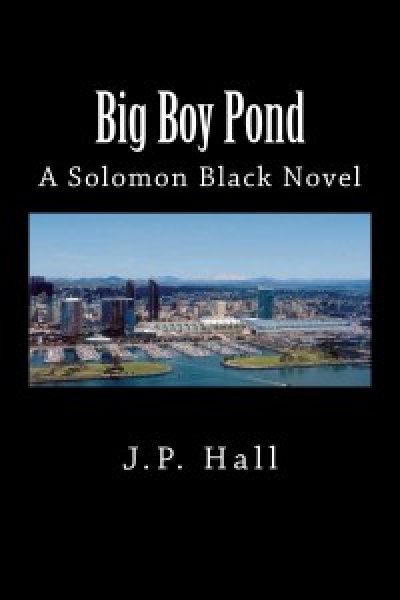 Solomon Black, an executive at Brougham Enterprises and his beautiful wife, Milan, are caught up in a maze of corruption, lust and murder when Solomon is sent to the beautiful exotic city of San Juan, Puerto Rico. There they discover that the owners of Brougham Enterprises, Nathan and Jerome Brougham, are not just real estate brokers, but are involved in international drug smuggling. Solomon’s discovery of the brother’s drug dealings is just the tip of the iceberg of the brother’s criminal activities.

In San Juan, Solomon and Milan meet Diego, an international businessman, whose dealings with conflict diamonds brings Milan’s complicated family background to light. After the Brougham brothers frame Solomon for embezzlement he must fight for his freedom and use all of his knowledge to save himself and Milan from the sharks that swim in The Big Boy Pond.

J.P. Hall was born and raised in Compton, CA. He loves to travel the world to experience the local culture in foreign lands. It’s this passion combined with his other love writing fact based fictional novels that portrays men of color in real world situations. That has inspired him to write the Solomon Black series. He currently lives in La Jolla, CA with his wife, 4 children, 2 dogs and someone else’s cat.

First and foremost I am a reader and as I traverse the landscape of books I found that the stories didn’t have any substance to them. I didn’t understand why a fictional story couldn’t be informational too. So I tried my hand at writing a story that also hold historical facts. Thus I coined the phrase fact based fictional stories.

CHAPTER FOUR:
TROUBLE AT HOME
Milan stared at the test stick, took a deep breath and waited for it to turn pink. But nothing happened. It was negative again. The ache in the pit of her stomach felt like her barren womb was telling her that she had failed again. She closed the lid of the cushioned toilet seat and sank down onto it. Inconsolably sad, she dropped her head in her hands. Then, overtaken by a sudden hot anger, she threw the test stick, along with the home pregnancy kit, across the room and the box struck the wall, scattering the contents across the floor. She promised herself that she wouldn’t be giving the E.P.T. manufacturers another red cent. She’d stopped taking the pill immediately after Solomon and her agreed that it was time to start a family but that had been over eight months ago and she still wasn’t pregnant. She placed her head in her hands and cried.
When Solomon woke up the sun hadn’t risen above the horizon yet and he could still see some stars through the skylight above their bed. He rolled over, expecting to feel his wife next to him but he touched an empty space. He sat up and looked around the bedroom and she wasn’t anywhere to be seen. In the early morning quietness he heard sobbing coming from the bathroom so he tossed the duvet aside and walked over to the bathroom door and listened. He could hear his wife’s sobs through the door.
“What’s the matter baby?” Solomon asked through the door.
There were some rustling noises and then the toilet flushed. “Nothing, I was just finishing up.”
Solomon heard the water running in the sink. “Can I come in?” He asked.
“Wait a minute, I’m brushing my teeth. I’ll be out in a second”
Solomon tried the door and when he found it unlocked, he opened it and stepped into the large bathroom area. Looking over at the sink he saw his wife standing there in just her underwear with her eyes swollen and red from crying
“Talk to me baby. What’s the matter?” He said, as he walked closer to her and reached out and pulled his upset wife close to him, pressing her head to his chest. She resisted at first but soon her body gave in to the comfort he was offering her. Solomon looked over her shoulder and he could see the pregnancy test box’s contents scattered on the bathroom floor. “It’s okay. We can try again next month,” Solomon said soothingly.
His words brought forth a new shower of tears from his distraught wife and her shoulders heaved up and down as he held her. Finally the flood of tears slowed and she placed her hands on his bare chest and lifted her head.
“Something is wrong,” She said, tilting her head back and fingering her tears as they rolled down his chest
“No, everything is fine. These things can just take time. Your body just has to get used to the idea that it’s time to have a baby.” Solomon really didn’t know what else to say to his wife because he couldn’t tell her the truth.
“I’ve tried all the things the books and the doctors say to do to increase my chances of getting pregnant but nothing has worked.”
“Maybe that’s the problem. Maybe you’re trying too hard. Why don’t we just let things play out naturally and stop thinking about it so much,” Solomon said, trying to offer a solution to the problem
“Maybe you’re right, but I’ve been thinking that maybe you should see a doctor.” Solomon bristled at her comment and he pulled away from his wife. He turned and walked out of the bathroom but Milan followed him, “Why don’t you want to go to a doctor?”
Solomon spun around to face his wife, “I told you, there’s nothing wrong with us, just give it time.”
“You mean there’s nothing wrong with you.”
“Alright then, yes, I mean there is nothing wrong with me. I have a child.” The moment the words left his mouth Solomon felt terrible. Not only did he just tell his wife a big lie but he also knew the words would push the blame of her not getting pregnant squarely on her shoulders even though he knew that wasn’t where the blame belonged.
Milan ran to the bed and threw herself down on it and the flood gates opened up again and the tears flowed.
“I didn’t mean that like it sounded baby. I just think you’re stressing way too much about this.” He rubbed her back as it heaved up and down.
“You don’t understand. I want a child and I want to give you a child just like Emma did. I’m your wife and I should be the one bearing your children.” She said between sobs.
“And you will.” Solomon said, trying to soothe her. “If you want I’ll go with you to the doctor. Make an appointment and we’ll go together, okay?”
Milan rolled over and looked her husband in his eyes, “You would do that?”
He reluctantly nodded.
“Thank you, but you don’t have to do that. We both know it can’t be you because you already have a daughter, Portia. It’s me! It’s all me!” She screamed and the tears flowed again.
Solomon rubbed his wife’s back, relieved that she wasn’t going to take him up on his offer. “We can always adopt,” He offered.
The scream came from the depth of Milan’s soul. Now Solomon really didn’t know what to do.
“Just go to work. I’ll be alright,” Milan said, reaching behind her and pushing Solomon away.
Solomon got up from the bed and after looking down at his sobbing wife, and feeling helpless, he thought to himself, “What if the surgery didn’t work?!”

Be the first to review “Big Boy Pond by J.P. Hall” Cancel reply