You are here: Products Between Two Worlds by Jessica Lovelace 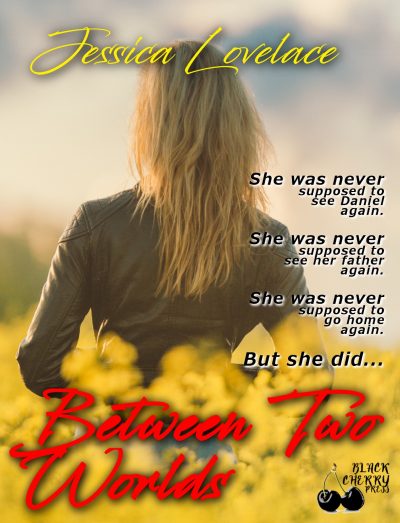 Between Two Worlds by Jessica Lovelace

Sometimes the best thing you can do is face the thing you fear the most.

Logan: she was the most beautiful woman I’d ever met. We were destined to be together.

Daniel: we were childhood sweethearts even if she didn’t know it. When she came back into my life I knew I had to try.

Mason: giving her up destroyed my life. Finding her again almost ruined me again.

Father: she broke my heart the day she left. I spent 13 years trying to win her back. But now it might be too late.

The story of a woman who returns home after thirteen years to discover as much as things have changed, they’ve also stayed the same.

A story of love, fear, the past and the power of forgiveness.

Jessica Lovelace grew up in Maine then moved to the mountains where she lives with her husband (an artist) and her dog Shipley. Jessica has written all her life, this is her first book. If you enjoy it, please share it. She's currently working on her next novel, also a romance.

It's based on my life and the men in it. The book is part truth, part fiction. I've written the story the way I wish it had turned out. The world would be a better place if it was more like romance novels 🙂

As Ella stood in the doorway of her executive office and surveyed the bright and cheerful environment of her marketing firm, she had no idea how quickly things were going to turn ugly.

She had ten minutes before a very special guest arrived and she decided to use that time for a little mindful meditation. Some people said it was bunk, but she found it helped to calm her nerves and prepare her for important events in her life.

She sat in the leather office chair behind a sleek uncluttered desk and closed her eyes, letting the sunlight shining through her 20th-floor office window warm her back. At some point, her mind drifted and now she was daydreaming about her life, and the man she was dating, Logan. Big, strong, handsome Logan. She shivered at the thought of him.

He'd been a hard man to find, so many of the men in the city were hard to read or strange in some way. That had been her experience at least, although, to be fair, she worked a lot more than she dated, so she hadn't been out with that many men. Sophia told her she was a prude. She wasn't, she was just picky. At least that's what she told herself.

They wanted fantasy. She saw plenty of women trying to be that for them too, but she could tell it was costing them a lot to do it, and what about after? After they were married? Would these women be able to maintain the illusion? For some, it would last longer than others, but eventually, it would crumble, every facade did, and their marriage along with it. Ella wanted something real and she was willing to wait for it – something and someone real.

"You gotta kiss a lot of frogs," Sofia, her assistant and best friend had said to her one day after yet another unsuccessful date. And Sofia would know, she'd done more than kiss a lot of them she admitted. But she'd met four men over her life that she'd eventually married. Two had ended in divorce and 2 had died. Sofia was not looking for number 5. She was 60 and although full of life and vitality, her need for a man, as she described it, was no longer relevant.

She'd met Logan six months earlier. Having given up on the idea of meeting someone, the old cliche kicked in, when you stop looking for something, that's when you find it. Well, he'd found her actually. After a particularly stressful day she'd gone to a nearby, shabby but popular repertory theatre.

But when Ella met Logan she knew he wasn't a frog, he was so different from all the other men she'd met. Quiet, warm, intelligent, a quick bright smile, and a strong body. Not the kind you get from the gym, but the kind you get from a life of hard work. He'd confided in her on their first date that he was a country boy and didn't feel 100% comfortable in the city, although he loved it there. She told him his discomfort didn't show, he seemed confident and at ease. "Well, that's our little secret then," he'd said.

On their first date, he'd met her at the restaurant, at her insistence. After some unpleasant situations, she'd developed a system for safe dating in the big city.

When he walked in she immediately noticed how his dark, tailor-made suit clung to his body in a way that made it seem almost like a second skin. He was clean-shaven with thick black hair that was only slightly longer than what was currently fashionable. He stood out, in a good way. As he strode towards her table, she noted that several women, and even a couple of men, turned to watch him. He was too good-looking. She'd started thinking about ways she could cut the date short when he did something that threw her completely off. He winked at her.

She almost started to laugh. Who did that? Who winked anymore? It was so old-fashioned. With some men, it would have been lascivious and creepy. With Logan, it was cute and endearing.

When he reached the table she stood and he took her hand. His was warm and soft and unlike many of the men she'd met, there was only the slightest scent of cologne, or maybe it was just his soap or shampoo. It was gentle and sexy.