You are here: Products Between the Tides by Darlene Kuncytes, et. al. 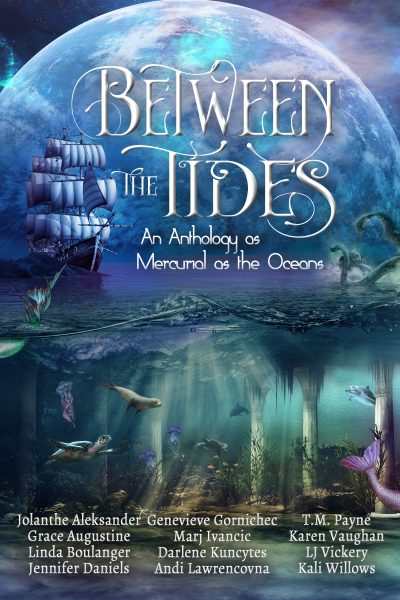 Between the Tides by Darlene Kuncytes, et. al.

When you stand beside the water, listening to the waves, what is it you feel?

The sea is a place where every emotion can be felt, every crash of the waves upon the shore a match to the beating of your own heart, no matter what is going on inside it.

“Between the Tides” is just that. A beating heart that rushes at you from the shoreline, and dares you deeper into the waves. Do the depths of the ocean offer a sweet respite from the world around you? Or are the snow fed lakes in the mountains that place where you can go to create an ice wall around your heart, or perhaps break it asunder?

Come with us where the creatures of the deeps and the shallows, creatures out of myth and legend, come to life and drag you into the waves.

Who knows, you might get lost on a pirate ship or carried away by a kracken…

The only way to navigate the shores is to travel:
Between the Tides

Jolanthe Aleksander, Grace Augustine, Linda Boulanger, Jennifer Daniels, Genevieve Gornichec, Marj W. Ivancic, Darlene Kuncytes, Andi Lawrencovna, T.M. Payne, Karen Vaughan, LJ Vickery, and Kali Willows are a diverse group of authors who have come together to create a one of a kind anthology that explores the depths of the greatest resource on our planet – water. From the shores of a lake in Ancient Britain to the banks of the Amazon River, the waters of Lake Superior to the greatest waters of our Oceans "Between the Tides" is a journey on the mercurial nature of the sea and sea life and our own human experiences, ever changing, ever unknowable, constant in that unending rush of wave over wave.

This group of authors has been friends for a long time and wanted to put something together that was both fun and exciting, and with summer almost upon us, what better than a series of stories about water and the adventures you can have when you get a little bit…well…let's say when you go for a swim instead!

MARISSA HELD HER breath as she cautiously glided closer to the shoreline, being careful to keep just her head above water as she took great pains to stay hidden from the goings-on at the beach. She moved in slowly, slipping behind a large boulder near where the men gathered. Undetected, she allowed herself a small breath of relief as their shouts and curses reached her ears over the crashing of the waves. Luckily the moon was at its fullest, and she could see the men clearly from her hiding place as they dragged an enormous hulk of a male along the beach, laughing drunkenly as they did.

The man was eerily still as he was callously tossed to the sand with no more regard than a sack of grain, and Marissa moved in a bit closer, trying her best to get a better look.

She knew she shouldn’t be here. That this was beyond foolish. She told herself that she should go back and leave these jackasses to their games. But, for some reason, she just couldn’t bring herself to do it. She stayed rooted to the spot, holding on to the rock in a death grip as she peered from behind.

“Arrogant bastard,” she heard one of the men growl, right before lifting a heavily booted foot and kicking the body lying in the sand with such force that she swore she heard ribs crack. She winced at the impact, certain that she had detected the sound of a grunt coming from the target of the bastard’s abuse. Even over the lapping of the waves, she was sure she had heard it.

He must still be alive.

The men laughed and encouraged each other to take turns viciously beating the man as they shouted out curses like the disgusting bilge rats that they were. Marissa’s anger began to bubble up inside of her. No one deserved to be treated so appallingly!

She cringed as she watched one of them stomp on their victim’s leg, and this time she was certain she heard his bone snap.

Marissa was all too familiar with this particular group of men. Although, referring to said cluster of degenerates as men was being more than generous. Filthy beasts would be more fitting.

They were from a rogue group of merpeople who were known to be no better than pirates. They stayed in their group and stole whatever they wanted in order to gain power. Not to mention, killed merely for the sheer pleasure of it. They got off on the rush they felt torturing and killing others. From what she had gathered, their main objective in life was to destroy other supernatural beings, thinking they would then be considered the superior species.

What a damn joke!

All her life she had heard tales of these devils. Cautionary tales told to her by others of their dark, evil ways. Advised to take the greatest of care to stay as far from where they made their homes. This particular group stayed in the murky waters near the shore, and her fellow merpeople would remind her that they were dangerous beyond anything she could ever imagine. And, even though she rarely ever ventured onto land, she knew that this group did.

It was common knowledge among her kind that these rogues enjoyed their nightly visits among the landwalkers. It was their opportunity to drink to excess and engage in all kinds of debauchery. Not to mention to capture and kill paranormal beings as well as humans at will, before slinking back to the sea like the scum that they were.

She couldn’t tell from her vantage point exactly what type of paranormal being they were currently torturing, but by the size of the body lying there so still, she would have to guess either bear shifter or dragon. They tended to be the largest of the shifters, and this one was particularly huge. It had taken all six men to drag him along the beach, and mermen were not weak by any means.

Once again, she told herself she should leave. Forget what she was seeing and get as far from these monsters as was possible, but she still didn’t move from her hiding place. Maybe it was the fact that she had never seen them at work before…or that it infuriated her to see another being suffer. She didn’t know, but she found herself drifting closer to shore before her better judgement could take over. It was almost as if she was being drawn there by some unseen force. A pull that was impossible to ignore.

Be the first to review “Between the Tides by Darlene Kuncytes, et. al.” Cancel reply