You are here: Products Between a Rock & a Hard Place by Laya D’Pearce 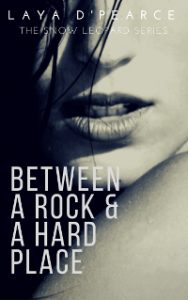 Between a Rock & a Hard Place by Laya D’Pearce

When she’s not writing smut, Laya writes non-smutty non-fiction, novels and short stories. She also runs and travels and takes photos—not necessarily in that order.

I’m a freelance writer, and I was interested in challenging myself as an author. I enjoy reading erotica and wanted to write a story that I’d like to read myself: super hot but funny and smart and kind of romantic. I also wanted to write about an older woman indulging in the delights of younger men, so the character of Kat Snow was conceptualised.

Driving to Old Mill Trail, I couldn’t get Saxon Delgado out of my mind. Google had given me a taste of what to expect. I was right. He was young. He had just turned 29. Unmarried, and unsurprisingly, linked with actresses and models, and even the occasional human rights lawyer. George Clooney had something to answer for. These days, anyone who was anybody wanted a human rights lawyer on their arm. They were the ultimate accessory—irrespective of whether the arm was male or female.
Saxon Delgado had been born into money, lots of it, and had grown up in Sydney, attending the best private school and topping his year academically. He had dropped out of university—and a promising career as a intellectual property lawyer should he have graduated—to become an ultra marathon athlete. He travelled the world running. I guess with all that money, he didn’t have to work for a living like the rest of us. Although he did have to share it with his two younger brothers, Norman and Roman.
Wikipedia had certainly painted an interesting picture of Saxon Delgado.
But there was one image of Saxon that had been burned into my brain. A black and white photo of him in a wooden hot tub, back facing the camera, his arms outstretched and resting along the sides of the tub, hands hidden. His face was turned so his profile was half in the light. Steam rose from the tub, and sweat beaded down his back. It was like he was beckoning me, provoking me to join him. Seeing that image, I felt my stomach flutter and my pussy dampen. How long had it been since I had fucked someone? Too long, apparently.
I looked at my watch and turned up the radio. I’d be at the trail in less than ten minutes. There was little traffic on the road so my mind turned back to the tub, and the hot man in it. I wondered what it would be like to feel him inside me, and I conjured up just that scenario.
I was naked and slipped my body into the tub beside him. He turned to look at me, surprised to see me and before he could say anything, I leaned in and kissed him, long and hard. My tongue flicked his, teasing, and I licked the smoothness of his teeth. Saxon moved one hand to the back of my head, the other to my breast, cupping it before he squeezed a nipple, pinching it until I moaned. I leaned my head back and he sucked on my neck, just beneath my ear. I moaned again. His mouth bent to my other nipple, biting it gently.
My hand moved under the water to his cock. He was hard and ready for me. I traced my fingers lightly up and down his shaft. One of his fingers had found its way to my pussy, and he shoved it roughly inside me. ‘Fuck,’ I whispered, melting.