You are here: Products Better Days are Coming by Austin Mitchell 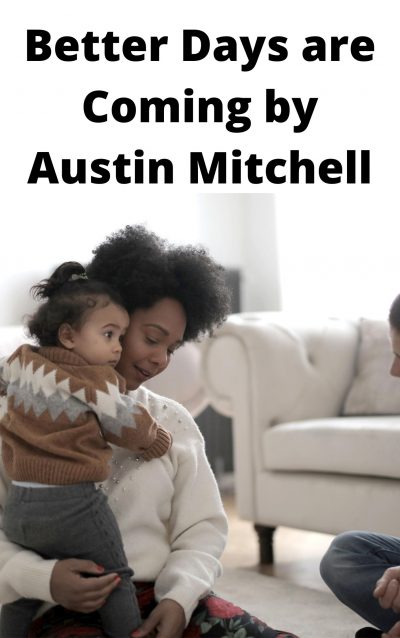 No Tears for Sonya- Most persons believed that Sonya was a wicked girl. She had been involved in some bad things in her younger days and even since becoming an adult. Will she find redemption and repent of her evil ways? Read the full story in No Tears for Sonya.

The Serial Burglar- Las and Dalby set out to capture Bender, a wily and dangerous praedial thief. On the way they have to fight the man’s sons to get to him. They also have to get out of Lobban’s Woods with Bender and avoid Clinch Salmon and his band of cutthroats. Read the full story in The Serial Burglar.

Wrong Directions-Romain was given wrong directions and robbed of all his possessions. He has remained on the island to find the men who robbed him. Will he succeed? Read the full story in Wrong Directions.

The Amateur Investor-Phil lost all his money in a failed investment scheme. His baby mothers have also taken him to the family court for maintenance. He has also suffered a shock at the loss of his money. Will Phil ever get on his feet again? Read the full story in The Amateur Investor.

Delaine’s Dilemma-When a woman is as beautiful as Delaine Tennant, men will do anything to get into bed with her. And that’s exactly what ex-cop, Clyde Harper, was trying to do. When Delaine dropped her lover, Easton Rivers, also another ex-cop, Clyde thought he was in business, except that he had another guess coming in the form or Marc Evers, also another ex-cop. Also, why was Easton so hell bent on destroying his ex-girlfriend’s reputation by labelling her as a worn out prostitute and a harlot? Read the full story in Delaine’s Dilemma.

Bad Man’s Woman- Was Elroy so infatuated with Carline that he would challenge a Don over her? Or maybe he didn’t know who a Don was. Read the full story in Bad Man’s Woman.

Writing-Profile of Austin Mitchell
Austin Mitchell has so far written two novels and is completing another. He has written many short stories, a few plays and poems. Several of his short stories have been published in his homeland. He has read hundreds of novels and has read widely on the subject. He has also attended a few writing workshops. He is a past student of St. Mary’s College, Above Rocks, St. Catherine. He is from a community, called Glengoffe, one of the largest communities in the island, which is in the north east of the island, bordering the parishes of St. Mary and St. Andrew. He presently resides in the city of Portmore, which incidentally is also in the parish of St. Catherine.

These were stories I heard from other persons.

No Tears for Sonya
by
Austin Mitchell
Chapter One
Sonya Brown was getting ready to go out with her occasional boyfriend, Mickie Harris, when her cell phone rang. Her boss, Chester Guthrie, was on the line. They talked for about two minutes before he ended the call.
“Who was that?” Mickie asked.
“Chester, he wants me to come to the office tomorrow at ten o’clock. He says it’s an emergency.”
“That damn slave driver, what does he want that can’t wait until Monday?”
“You’re still bitter at him for firing you after that detective told him about you and Tanya.”
“That guy was lying.”
“Why did you have to go out with her when you know that she was Chester’s woman?”
“She begged me to go with her for a drink. We never went to any hotel.”
“I still want to know why you did it? I was calling you while you were with her and only getting your voicemail.”
“That was almost two years ago and we’ve gone over it many times since. We don’t know why Chester wants you down at the store tomorrow.”
“Maybe he’s doing some stock taking, but I worked until three o’clock today and he didn’t say anything to me.”
“You think he could have found out.”
Sonya bit her lips.
“About what?”
“The apartment and the three taxis you have on the road.”
“I don’t think it’s that. He can’t prove that I’ve ever stolen any money from his hardware store.”
“Still want to go out again?”
“No, I’m sorry. I want to know what he has up his sleeves.”
“I told you to leave from about four years ago, but you wouldn’t listen.”
“Leave and go where? You know that if I resigned, he would get suspicious. I’ve been with him, since leaving high school almost twelve years now.”
Mickie patted the gun at his waist, hidden by his sports shirt. Sonya also carried a gun in her handbag. It was a Smith and Wesson, Colt. 22. She had completed a firearms instruction course. She had been careful not to let any of her colleagues know about it.
“Do you want me to get Carlos to bump him off? We made him take care of Judy when she got too nosy.”
“Are you crazy? And as to what happened to Judy, you know that I had nothing to do with it.”
Judy Binns had been one of Chester’s assistants and she had begun to ask some awkward questions. One day she saw Sonya writing receipts for customers in an irregular receipt book. She had threatened to go to Chester.
Sonya had wanted to give the girl a good beating, but Mickie had suggested that they used Carlos to beat her up. God, she hated Judy. It was like Chester had set her to watch her. Sometimes she would burst into her office unannounced. She was still in shock when she heard that Judy had been killed in a hit and run accident. She had refused to give Mickie any money to give Carlos.
She remembered Alton West. They had been going around for a year before she ended the relationship. Alton kept turning up at her gate at all sorts of hours, begging her for another chance. He had lost his job, the bank had seized his car, in fact, he was almost bankrupt with credit card debts of over half a million dollars. True, she had helped him run up the credit card debts, but she didn’t want any broke pocket men around her. One night, she had called the police on him. He got into an altercation with them and was shot. He died the next day in hospital. His family and friends had blamed her for his death, but she felt blameless. Nothing came out of the case. The policeman who shot him claimed that he fired his gun in self defense after the man stabbed at him with a knife. She felt that after eight years, it was time to put the whole episode behind her.
“We don’t know what he’s up to. I think we should wait.”
“What if that detective is spying on us and reporting to Chester?”
“What could he report? The money from the apartment is sent straight to my bank account and remember that you manage my taxis.”
“Suppose he finds out about us?”
“He doesn’t know that I’ve stopped seeing Skippy.”
“I’m tired of this kind of life. We have to be hiding just because of one man.”
“You’ve just got to be patient. Things will work themselves out.”
“It’s like all his employees are slaves. He doesn’t trust any of them. That’s why he fast into their business so much. I’m glad I’m no longer working for him.”
Sonya came and hugged Mickie. She could feel his frustration. Maybe after tomorrow she would know what to do about Chester.
“Let’s go down to Randy Chin’s bar and have a few drinks. It might make you feel better.”
“Okay, but I just feel like going with you tomorrow and let him know about us.”
She wondered what Mickie was talking about. They had too many break ups over the five years they had known each other. She certainly didn’t want anymore relationships with him. She would soon tell him that they should let their relationship remain as employer and employee. That would put him down a peg or two, but she didn’t care.
“I’ll lock up the house and we can go.”