You are here: Products Betrayed by Bethany Burke 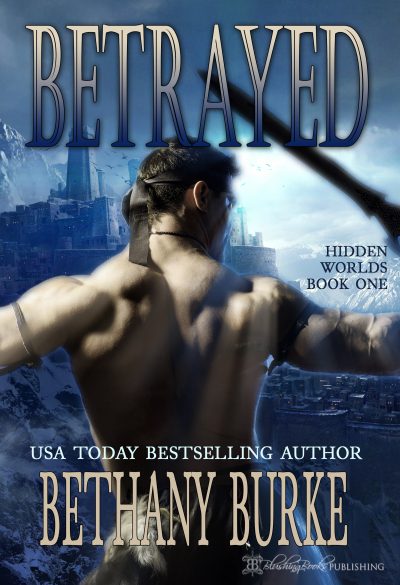 Four hundred years in the future, life on Earth is perfect. The genders are equal. War is non-existent. Everything is clean, safe, and wonderful, due to one cause: In the early years of the twenty-second century, over 90% of the Earth’s population was relocated by force to colony planets spread over the galaxy.

Jen Marin has a gift for languages. When she’s slotted at the last minute into an off-Earth expedition to study the linguistics of a colony planet, she never questions the assignment. It’s a perfect opportunity to get an advantage over her fellow academics on Earth. She, along with her companion Christy, also never questions a recreational trip to an isolated area of the planet’s surface, that is until they go back to the space craft – and it’s gone.

As impossible as it seems, they’ve been abandoned. But why? And to what? Jen’s new reality is a world where her body is not her own, filled with heavy handed warriors, cruel Matrons whose sole purpose is “training” young women for their marriages, a prince who wants Jen for his own, and mysteries that seemingly have no answer.

It has to be a mistake, right? The ship is coming back for them, right? Or have they been betrayed in ways they can barely begin to imagine?

Publisher’s Note: “Betrayed: Hidden Worlds Book One” is the original sci-fi kink classic, set in a world where domination and submission is the norm. It contains explicit scenes of discipline and sexual training, against the backdrop of a fantastic science fiction adventure. If explicit scenes offend you, please do not buy this book.

Mareen had been sent out of the classroom; obviously as part of her punishment, she had to stand in the hall, with her nose to the wall next to the classroom door. Her tunic top was lifted, held around her waist, and with her hands, she held her white trousers parted. Her punished bottom glowed like a ruby, the red of the rose barely visible now, and she was snuffling miserable. She was squirming a little, rocking her hips back and forth slowly, and I noticed that she held her feet in an odd position, toes in, heels spread out.

The men glanced at the sight, again grinning unabashedly. I was taken again, though, by their reactions. They were amused, certainly, but treated what we had just seen without much real emotion, as if the whole thing was interesting and funny, but not that unusual.

I looked at Christy. Her blue eyes were as wide as mine felt. “We have to get out of here,” I mouthed silently.
“How?” she mouthed back, looking desperate.

How indeed? We were guarded by three burly soldiers plus a hardly-petite Matron. This was obviously a prison of some sort. We’d come several hundred yards through it and had seen well enough that it was crawling with the Matron/guards. Before that we’d walked through a not-insubstantial town that resembled a maze more than anything else. To think that we could just sprint off and somehow find our way back to the ship was a prospect so ludicrous that it wasn’t even worth contemplating. Intellectually, I knew that our only hope was to wait for a better opportunity. We’d had no training for situations like this… hostile encounters with locals. But common sense told me that I had no choice but to seem as docile as possible; it was the only way they might let down their guard.

We turned a corner, and walked on through the dimly lit classroom building. As we walked on, I also saw further evidence of our captors’ barbarism. Outside of several other classrooms I saw red-bottomed miscreants standing in the hall, just we’d seen Mareen. One here, one there, and in front of one classroom, five sniffing girls stood in a row, holding up white tunics, cherry red cheeks glowing. All stood with the same odd stance, leaning forward, noses to the wall, bottoms poking out, with their toes turned in, heels spread apart. I realized that the position caused not only their punished bottoms to be on show, but it caused their female parts to display partly open as well. Every single one bore on her left cheek an emblem of some sort. All were full color and just my quick, horrified glances told me that the markings appeared to be permanent, right into the skin.

Be the first to review “Betrayed by Bethany Burke” Cancel reply