You are here: Products Bet on the Boss by Kate Zonk 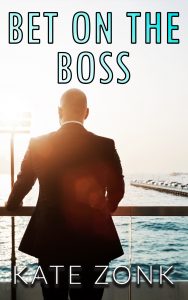 Bet on the Boss by Kate Zonk

Other than writing and reading, playing with my lovely dog is the next best thing. I love watching people in the park while walking my four-legged baby. It gives me needed inspiration and new character ideas.

My imagination inspired my to write this book. We all read a lot about rich men and poor women relationship and call such stories – fairy tales. So I thought what about a rich strong woman with great education and ex-marine with no idea about the civil world? Can they overcome their differences? Can they get their happily ever after?

Adam fixed his tie as he sat in the lobby of Abacus Limited filled with men of his age. Each of them held a resume while Adam was empty handed. He was feeling increasingly nervous by the second due to this. He had called his cousin the night before to make sure he wouldn’t miss anything. Wes had said that all he needed to do was show up for the interview. Was this but a cruel practical joke played by Wes? He imagined that his cousin would have a good laugh at his embarrassment.
Adam decided to leave before it came to that and proceeded to get up. He stopped midway as a woman walked into the lobby. Adam could see that she was exceptionally beautiful, however, it seemed as she was intent on hiding her beauty rather than showcasing it. She wore a simple grey suit that looked a size too big for her, had no makeup on and had her hair pulled back into an untidy ponytail. She wasn’t the kind of woman who would draw looks but she intrigued Adam. Someone so unaware of his or her own beauty had to be an extremely interesting person. He stared at her as she crossed the lobby until she turned a corner and vanished from his line of sight.
“Adam Winchester!” called out the young girl sitting at the desk in the lobby, “You can go in now.”
“Fuck,” Adam muttered under his breath, “Can’t possibly escape now.”
With his mind still on the woman he had just seen, Adam walked over to the main desk in the lobby. His nervousness knew no bounds and the woman had not helped. With his fists clenched hard, he leaned over the desk.
“Where am I supposed to go?” he asked the girl.
“Down the hall, the last door on the left,” she said without looking up from her computer screen, “You’re looking for a Mr. Andrew Bates.”
“Right,” he muttered and set off.
He walked down the air-conditioned highway, crossing numerous wooden doors. Despite his age, he had never had a formal interview in an office before. He had worked only odd jobs before volunteering for the Marine Corps and flying off to Afghanistan. Sighing as he reached the last door on the left, he knocked gently.
“Come in!” called a man from inside the office and Adam hastily entered.
The office was a small one, with just a desk, two extra chairs and a small black leather sofa pushed up against the left wall. The man sitting behind the desk was of a medium stature with red hair and a French beard and he wore a floral shirt that needed ironing. He leaned back in his office chair and chewed a pencil, looking him up and down.
“Ah!” he called in greeting, “You must be Adam Winchester.”
“Yes, that’s me,” said Adam, as he extended a hand to shake his.
The man shook his hand and gestured for him to sit down. “My name is Andrew Bates,” he said, “I’m the head of security for the whole building. It’s nice to meet you.”
“Likewise,” said Adam, smiling. This man wasn’t so bad, he thought to himself.
“So I have your resume here,” said Andrew, looking through a folder in his hands, “Wes forwarded it to me this morning. I heard he was your cousin?”
“Yes,” said Adam, surprised at his cousin’s kind gesture, “His father was my father’s brother.”
“Okay, okay,” said Andrew without looking up from the folder in his hands, “So I see you were with the Marines for three years?”
“Yes.”
“Hmm,” said Andrew, looking at him over the folder in his hands, “I never really understood the point of this war. Probably just an opportunity for higher-ups to make money without anyone being the wiser.”
“Excuse me?” said Adam, surprised at the man’s ignorance.
“You heard me,” said Andrew, finally looking at him, “I think that this war is just a way to make money. They want to end this war, they freaking nuke the Middle East and be done with it. And to be extra safe, imprison and hand all those ruddy Muslims in this country.”
“They can’t nuke anything and that would be just murder,” said Adam, trying his hardest to keep his cool.
“Not murder if it’s those terrorist Muslims,” said Andrew pointedly.
Adam paused, surprised at the man’s incredulity. “Sir, can we please just focus on the job interview?” he asked, carefully measuring out each word.
“Oh yes,” said Andrew, nodding, “You’ve got it.”
“What?”
“The job, soldier,” said Andrew with a laugh, “You’ve got the job.”