You are here: Products Bernie Taylor by Paige Summers 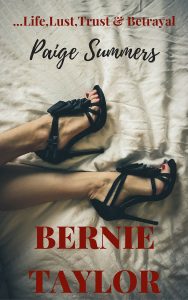 Bernie Taylor is my debut book and to get an idea of my style there is also a short read, which is ideal for a 10 minute break or an insight into Bernie Taylor, called ‘A moment with Bernie Taylor, Room 112’ that is available from www.sleepinglionspublishers.com for free. What have I done today?…Well, I have thoroughly enjoyed getting stuck into the 2nd book in the series about the sexy Bernie Taylor and look forward to where the chapters first take me, then it’s over to you guys x

Writing is something that I’ve wanted to do for a lot of years now but it seemed life got in the way until I woke up one day after having a flood in my home and thought, if I have no TV and no sofa to sit on at the end of the day, I should make the time count and so sat down at my desk which was fortunately upstairs and with a glass of red in one hand started the first draft of Bernie Taylor. I had always enjoyed Jackie Collins books myself or the central character of Bridget Jones, so I decided to have one main character. A sexy strong female called Bernie Taylor and write a story that I would enjoy to read, and so she was born!