You are here: Products Bennett’s County by Darrel Sparkman 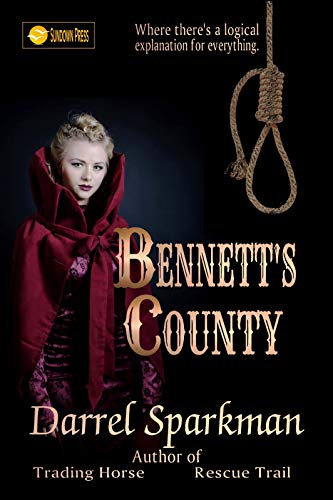 Sheriff Billy Bennett takes his job seriously—and he’s darn good at it. No one breaks the law in his county. So when he gets a complaint of women dancing naked in the nearby forest, of course he has to investigate. Some say they’re witches, but Sheriff Bennett doesn’t hold with that—he doesn’t allow witches in his county.

But when a self-proclaimed warlock comes looking for them with plans to steal them away, Billy Bennett has him ushered out of Bennett’s County for good. There are no warlocks…only bad men. And Sheriff Billy Bennett will see the law is obeyed, no matter what—or who—tries to bend the rules.

Caught in the middle of an odd battle, the sheriff begins to wonder if he’s bitten off more than he can chew in order to keep law and order alive and well in BENNETT’S COUNTY… Is there any way this can end well?

Darrel Sparkman is a published author of nine novels, two novellas, over a dozen short stories, numerous blog articles and has been a feature writer for Saddlebag Dispatches. Ideas come from a diverse past of serving as a combat search and rescue helicopter crewman in Vietnam and a volunteer Emergency Medical Tech. He has worked as a professional photographer, computer repair tech and was part-owner of a commercial greenhouse operation and flower shop. Darrel is enjoying semi-retirement and finally has that job that wakes you up every day with a smile.

Samuel was about half the size of his wife, a phenomenon I’d seen before. I always looked closely for bruises, but never found any on him. I shouldn’t be suspicious. I’m sure she’s the sweetest thing on earth.
He sure was jumpy. If you came up behind him and poked him in the ribs, he’d jump about two feet in the air. Some of the boys had taken to coming up behind him on the street and setting off firecrackers. Jumpy. I needed to catch those boys, because the noise was hard on horses. We had a couple run off. One had Arnold on it.
He took his hat off and worried the brim a little. “Well, Sheriff, Emma thinks that witch is at it again.”
It was a morning for contemplation. The most wonderous thing is how ideas get started—good and bad. Most folks hold their opinions to themselves. Seems the ones we don’t want to hear are always proclaimed the loudest. The dangerous thing disturbing my contemplation is that these people were serious and that was disturbing. There’s no amount of trouble that can come from people who convince themselves in their own stupidity and follow their new-found belief in righteous indignation. I studied them close as I practiced my reply. My lips may have moved some.
“Which witch?”
Emma gasped. “There’s more than one?”
In a practiced move, both turned to the side and spit between their fingers. Hers landed first, but she’s a lot bigger—more power.
She turned back to me with a triumphant stare. “I knew it. We have an infestation.”