You are here: Products Benign Flame: Saga of Love by BS Murthy 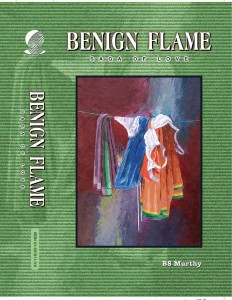 The attractions Roopa experienced and the fantasies she entertained as a teen shaped a male imagery that ensconced her subconscious. Insensibly, confident carriage came to be associated with the image of maleness in her mind-set. Her acute consciousness of masculinity only increased her vulnerability to it, making her womanliness crave for the maleness for its gratification. However, as her father was constrained to help her in becoming a doctor, she opts to marry, hoping that Sathyam might serve her cause though the persona she envisioned as masculine, she found lacking in him. But as he fails to go with her idea, she becomes apathetic towards him, and insensibly sinks into her friend Sandhya’s embrace, for lesbian solace.

In time, she comes in contact with Tara the suave call girl who unsuccessfully tries to rope her into her calling to achieve which she introduces Ravi the seducer. However, when Roopa goes to attend Sandhya’s wedding, she loses her heart to Raja Rao the groom even as Prasad, her husband’s lecherous friend falls for her. The scheming Prasad induces Sathaym to go the corrupt way besides weaning him away from Roopa with the aid of whores to make his path clear to her amour and that throws her into a dilemma. But as fate puts Raja Rao into Roopa’s arms, how the tale ends is best described by one Mr. Spencer Critchley, thus: “It’s a refreshing surprise to discover that the story will not trace a fall into disaster for Roopa, given that many writers might have habitually followed that course with a wife who strays into extramarital affairs.”

Who said the novel is dead; ‘Benign Flame’ raises the bar.

BS is a graduate mechanical engineer from Birla Institute of Technology, Mesra, Ranchi, and he interests himself in current affairs, sports, etc. and has an ear for Carnatic and Hindustani classical music.

One may like to know that all my six fictional children, the eldest being Benign Flame were born out of my conviction that for fiction to impact readers, it should be the soulful rendering of characters rooted in their native soil but not the hotchpotch of local and foreign caricatures sketched on a hybrid canvas and in my translations in verse of the Sanskrit classics, I strived to make them as English friendly as I could. My non-fiction is an effort to delve into the anatomy of Islam and dissect the psyche of the Musalman.

Be the first to review “Benign Flame: Saga of Love by BS Murthy” Cancel reply