You are here: Products Before Nightfall by Rachel Amphlett 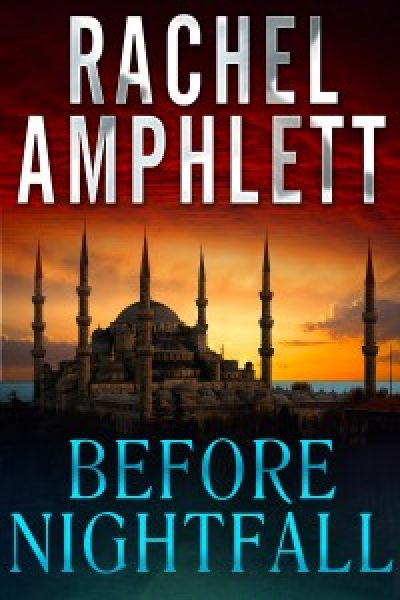 Before Nightfall by Rachel Amphlett

“If they move you, they will kill you.”

Kate Foster is quick to forget the advice from a pre-deployment hostage survival course once she’s catapulted into a new job in Eastern Europe, despite the good-looking instructor. But a simple day’s task in Istanbul six months later goes horribly wrong.

Trapped and alone, her only hope of survival is the man who trained her – ex-FBI Hostage Rescue Specialist, Finn Scott.

For Finn, it’s his worst nightmare. Kate was the one person he almost let into his heart. Haunted by memories of a failed hostage rescue, he is thrust into a situation beyond his control. Now, against a sinister adversary whose ambitions will split apart Eastern Europe, Finn must overcome his demons to prevent an international catastrophe.

Kate Foster’s breath escaped her lips in short, shallow bursts.
The sack, which had been placed over her head when she had first been attacked, clung to her mouth and nose with each inhaled gasp.
Condensation prickled against her face, the lack of air suffocating. Her heart beat rapidly, hammering against her ribcage, while a trickle of sweat worked its way between her breasts.
The hard wooden chair pierced the denim fabric of her jeans, and she wriggled backwards, trying to ease the pressure on her pelvic bone.
‘Stay still,’ said a voice to her right.
Her head twitched, and she held her breath, sensing the man as he drew closer. She caught a faint trace of his scent through the musty fabric of the sackcloth – sweat, a hint of hours-old aftershave.
Her heart skipped a beat, and her stomach clenched. The smell grew stronger, and she turned her head from side to side, trying to gauge the man’s exact location. A faint echo of his shower gel lingered in the air between them, a mixture of musk and jasmine.
‘No-one’s coming to get you,’ he murmured in her ear.
Kate jumped in her seat, not realising his proximity had been so close. Her heart raced harder, and she exhaled, trying to keep calm, the rushing sound in her ears now deafening.
A low chuckle vibrated next to her skin. She twisted, trying to gain some distance between them.
She’d lost all sense of time. This morning, she’d been talking to three colleagues outside, taking advantage of the rare sunshine that had bathed the courtyard.
The attack had been swift, well-coordinated, with no warning.
Her jewellery and watch had been removed from her, and then she’d been shoved into a small room with her colleagues, and told to stay silent.
Maybe an hour had passed, during which time her colleagues had been taken one by one from the room, leaving the remaining captives to their own thoughts.
Then, the hostage takers had returned for her, dragging her from the sitting position she’d been forced to adopt, the sack over her head damp with condensation from her breath.
She’d felt a hard surface under her feet, and then a door had slammed shut behind her. She’d been forced into a chair, before her wrists were pushed through plastic cuffs and secured.
Now, her breathing increased as she tried to remember what she’d been told, what to do to keep her captor calm. She worked her wrists, trying to loosen the cuffs and keep the circulation flowing through her fingers.
‘They’ll pay you,’ she whispered, then coughed and cleared her throat before repeating herself. ‘They’ll pay you. To let me go. To keep me safe.’
An exasperated sigh escaped the man’s lips.
Kate held her breath, and then jumped as the sackcloth was ripped off her head. She blinked in the rays of light shining through the grubby farmhouse window.
‘No!’
The voice drew her attention back to the man who was now standing in front of her, hands on hips, glaring.
‘Don’t ever try to bargain with them,’ he said, then turned and strode across the room to a table. He threw the sackcloth onto it and slumped into another chair, facing her, his foot tapping an unknown beat on the floor. ‘You do that, they’re going to feed on your desperation.’
Kate shifted in her seat and watched his heel bounce up and down, and then caught him staring at her. She blushed and lowered her gaze.
The hostage course was so damn hard – only three days to remember everything the instructors were trying to teach her, on top of a bad case of jetlag after her flight from the US two days ago. The difficulty rating went through the ceiling when the taller of the two, now berating her, looked so bloody good in the tight black t-shirt he was wearing with his jeans.
She raised her head and watched the man who was running his hand through his unkempt brown hair, frustration etched across his face.
He appeared to ignore her discomfort. ‘Small steps. Build up a rapport – don’t discuss politics, religion or your own situation. Keep it simple. Ask for small favours.’ His voice rose. ‘And under no circumstances talk about paying a ransom. Ever.’
He rose from the chair and stalked towards her. ‘That’s the hostage negotiator’s job, and you could ruin everything he’s trying to do to save you. Remember the basics we discussed in the classroom yesterday?’
Kate swallowed. She found her concentration wavering as she stared into his green eyes, sure she could see gold flecks around the edge of his irises, and then cursed inwardly as her bottom lip quivered. Although it was a simulated kidnapping, it had been frighteningly real.
Her eyes stung, and she blinked, inhaled deeply and tried to ignore the heat in her face. ‘Can you at least untie me?’