You are here: Products Before He Was Famous by Becky Wicks 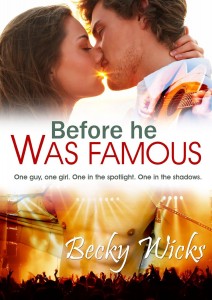 Before He Was Famous by Becky Wicks

One guy, one girl.One in the spotlight.One in the shadows.Falling in love with your best friend isn’t always a great idea, especially when he’s Noah Lockton – the sexiest, most famous new talent on the planet. When photographer Chloe Campbell is offered the chance of a lifetime – to join her celebrity childhood friend Noah on tour as an exclusive blogger – she’s certain both have put what happened four years ago behind them. But his eyes still burn; his voice is still a jackhammer to her heartstrings; all his songs are about her. Is it possible that that night still haunts them both?The music industry is a machine, spinning hype and rumors as much as his records. It’s not just Noah’s girlfriends who’ve got it in for Chloe (there’s no stopping the Twitter-obsessed, cat-loving pop-star Courtney Lentini for starters). Pretty soon, the jealousy and media frenzy surrounding these so-called-friends takes a life-changing turn and it seems making love means making enemies at every turn. When tragedy threatens to pull the final curtain on their relationship, both Chloe and Noah must make a choice. As much as this world leaves them starstruck, is living their dream really worth living without each other?