You are here: Products Beautiful Devil by Sharlyn G. Branosn 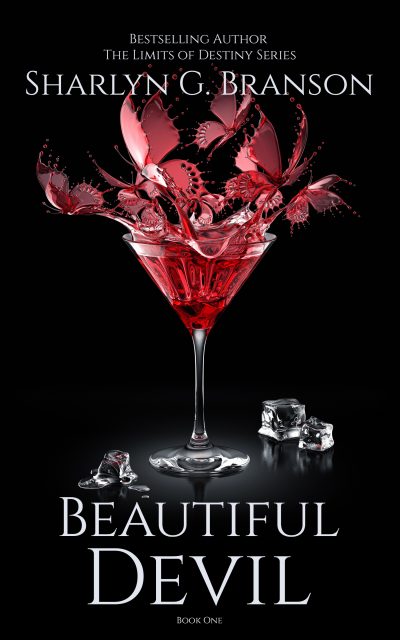 Sex, wild parties and alcohol.
When you’re the lead singer of a rock group, you don’t
need to make much of an effort to attract the attention of a hot chick—the music had already done that job for you. And when you make her scream in bed, tightly gripping the sheets or digging her nails into your back—it is mission complete.
Everybody calls me the devil. I think they dubbed me that because they believe I’m heartless. Perhaps they’re right…
I don’t know the meaning of the word “love” and I’ve always tried to avoid emotions. I suspect the reason for that is hidden in my past. I really have no idea and don’t want to try to find the answer.
The only question I’m still seeking answer to is: Why, since I met her, can’t I think of anything other than the petite French woman with thick lips and the body of a goddess, Emily Delon?

Sharlyn G. Branson is a Bestselling author of contemporary and new adult romance—BEAUTIFUL DEVIL DUET, BETWEEN CLOUDS AND STARS and THE LIMITS OF DESTINY SERIES (ranked #1 on Amazon USA, UK, Australia and Canada). She is known for her sexy romance style that's full of mystery and emotions.

Sharlyn is happily married and mother of a lovely boy. She is addicted to coffee and love to travel around the world with her family.

Sharlyn G. Branson is currently working on her next novel…

“DON’T YOU DARE contradict me, you dumb bitch. When will you learn to show me re-
spect?”
Just as my father finished saying those words, his
hand landed on my mother’s cheek. The slap knocked her to the kitchen floor.
I couldn’t stand watching him beat her. Why did he do it? Wouldn’t it be easier if they got divorced? After all, they didn’t love each other.
I hated my father, Josef, more than anyone else on this Earth.
God, to think that his blood flowed through my veins! How could we be so different?
I was sick to death of the constant beatings he gave my mother and me. It was his fault I was aggressive and got into fights in school, but I’d sworn never to lay a hand on a girl. Never!
My heart beat so hard I thought it might burst. “Don’t hit Mom,” I said in a voice I barely recognized as my own.
Josef turned to me, his eyes piercing, though blood-
shot from drinking. With his overgrown beard, shaggy hair, and bulky body, he looked like a werewolf who’d stepped out of some horror movie. I was afraid of him, but I couldn’t let him abuse the only person who truly cared for me.
“Are you trying to boss me around, you little shit?” Just three long strides and he was in front of me. His fist struck my chest, and I flew back, hitting the wall behind me.
I coughed as agonizing pain shot through my ribs and reached my lungs.
God…
I still hadn’t recovered from the beating he’d given me three days ago. I looked up to see him unbuckling his belt. He was going to lash me with it to teach me to not meddle in his business ever again.
“Please, Josef, don’t beat him.” My mother’s sobs tore through my heart. “I beg you.”
Something had to be done to end this. How much more would we have to go through? How much longer did we have to endure?
My father turned to her and screamed, “Shut your fucking mouth, bitch.”
Just then, my eyes fell on a dirty frying pan on the table. I grabbed it and lunged toward the man I hated with all my heart and soul.
Josef tried to stop me, but lost his balance and fell to
the floor. I took advantage of the opening and hit him on the head with the frying pan, over and over again.
I was quite muscular for my tender ten years, and now it was as if my strength had somehow tripled. My blood coursed through my veins and pulsed in my ears. The whole world around me disappeared as I recited the mantra in my mind: Hit him. Hit him as hard as you can.
I had lost my mind.
I have no idea how many times I hit him, but when I stopped, I realized that what I’d done was irreversible. Josef’s face was mutilated beyond recognition.
How could I have done this? I was just a child. Maybe the devil had possessed me?
I looked at my mother. Her eyes were wide with shock. She’d put her hand over her mouth, suppressing her sobs.
“Mom…I think he’s dead.”

TWO WEEKS HAD passed since I returned to Miami from a world tour with my pop rock group, Blackstone, and I still couldn’t recover from the wild life: all-night parties, easy girls, alcohol, and cocaine. I was only 27 years old, but I was exhausted. My life had become a roller coaster. I would plunge down, narrowly escaping death, and then shoot up again, high into the sky. It was then and only then that I felt truly free.
This whole thing repeated day after day.
Why did I do this to myself?
I had no idea what it meant to be in love, because I
always avoided getting emotionally involved. I knew the reason for that was hidden in my past, which still followed me everywhere—like a black shadow. Some- times I simply couldn’t take a breath and felt like I was suffocating, and I also had nightmares. But no one can choose their parents or the childhood they’re given.
However, we’re all born into this world with a cer- tain mission. I knew mine was music. It was the only thing that gave me peace.
I’d always dreamed of being on top of the world, and
eventually I’d managed to reach it. Fate had smiled and nudged me out of the dark hole I’d been in. Blackstone now enjoyed worldwide fame, and the bars and night- clubs I’d opened as investments in Europe and the States were always jam-packed with partiers.
In short, I led a life others could only dream of. I had fame and enough money to buy anything I could want.
And yet… Something was still missing.
I often asked myself, What do I need?
It wasn’t women. As the lead singer of a rock group,
I didn’t need to make much effort to attract hot chicks— the music had already done that for me. I rarely had to spend the night alone. True, I never fucked any woman more than once. But I didn’t feel the need to do so. One night was more than enough. The chicks I spent the night with knew not to expect more from me anyway.
I was good at making them scream, grip the sheets tight, and dig their nails into my back. And then…then it was mission complete. They were left happy with their evening, and so was I.

Be the first to review “Beautiful Devil by Sharlyn G. Branosn” Cancel reply