You are here: Products Bearly Smitten by Misha Carver 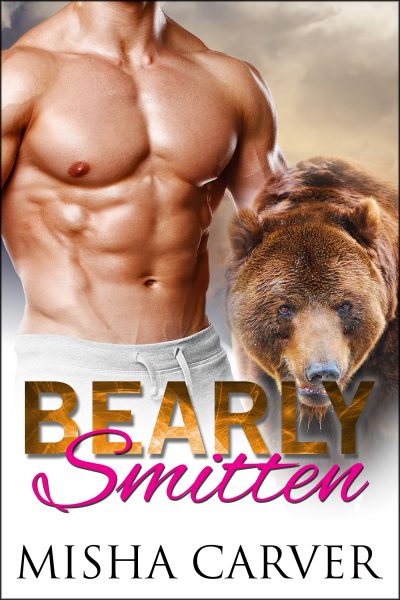 Have you ever fallen in love with someone you shouldn’t? Jed, my boss, is hot. I mean, smoking hot. But it gets worse. He’s also a womanizing jerk and a bit of a tyrant. He’d devour me if I let him. I know I should turn around and walk away, but I can’t. The heart wants what the heart wants, and it will do or endure anything to get it.

There are rules in business. Never hire a beautiful woman and never fall in love with her. Rule number one comes back to bite me in the ass every single time. You’d think a grizzly shifter of my stature could find a suitable mate without picking off his employees one by one.

Will Carrie meet Jed’s expectations to fill the role of a lifetime or will he have to pass on one of his engagements? Fur flies, stocks rise, and passion ignites in this paranormal shapeshifter romance.

Misha Carver loves writing sensual paranormal/shifter and new adult/contemporary romance stories for people who want to escape into another world. Whether you're looking for shifter tales or hot alpha males, Misha's your girl. Why not put her on your eReader or Kindle today?

“How do I look? ” I said, turning to look at Marissa.
“You look great,” she said, smiling. “I don’t know why you’re so nervous. You’re going to nail this thing.”
“I have to now that Dominic’s in jail. There’s no way that I can afford to keep this apartment by myself. If I don’t get this job, I don’t know what I’m going to do.”
“Stop panicking. Get down there and show them how it’s done,” she said as she steered me towards the door.
I stepped outside and got into the cab that sat on the curb waiting for me. I longed for the loud hum of Dominic’s bike even though I knew it wasn’t coming for me.
“Where to, lady?” the cabbie asked as I got inside and closed the door.
“Barton & Associates on the corner of West and Main,” I said as I juggled my briefcase and purse.
As he pulled out of the driveway, I couldn’t help but tremble at the thought of interviewing for Jed Barton. Although his company made millions, from what I’d heard, he was almost impossible to work for.
I wasn’t even sure if I’d make it through the interview before he chewed me up and threw me out. At least I’d give him a good fight first.
A quick glance out the window set me off balance. I turned my head in a state of panic, trying to recognize something…anything.
“Where the… What are you doing?” I asked the driver when I realized he’d taken a detour.
“Barton Associates like you asked,” he said as he continued driving.
“You could’ve taken the throughway or the roundabout on Dixon,” I said, realizing he’d decided to take the scenic route to make more money.
“Look, lady, you just asked me to get you there. You didn’t give me directions.”
“My interview’s in ten minutes and you’re going to make me late,” I mumbled angrily as I gazed out the window.
I smoothed my skirt and fiddled with my nails out of nervousness while I panicked about the time. I already knew that Jed Barton was going to make lunch meat out of me.
“You should have said that when you got in,” the cab driver said as he turned to look at me. “I’m not a mind reader. I’m just a cab driver.”
“And not a very good one. When you run on a meter, you should take customers to their destination by the fastest route possible,” I argued back. “Now get your eyes back on the road and let’s get going.”
I tapped my fingernails against the leather briefcase that Dominic had given me for Christmas two years prior. He was both the best thing and the worst thing that had ever happened to me.
***
I never meant to start dating him and I never meant to fall in love. Oh, but he was worth it. So worth it.
It was the summer of my eighteenth birthday. My boyfriend Seth and I had split up a few weeks before school ended and I intended to stay single until I started college in the fall.
I’d managed to enjoy the single life up until the weekend before school started. That’s when I saw him—Dominic.
My best friends—Amanda and Lara—and I decided to go camping to celebrate a farewell of sorts. Our farewell to summer, and to each other. We knew that with the start of college came our adult lives, and we’d probably drift apart soon afterward.
As soon as I saw him standing there at the campsite beside ours in the ripped-up denim shorts with the bronzed skin and long, dirty-blond hair, I knew he was the only guy for me. His steel-blue eyes tore through my soul as if they understood me in a way that no one else ever would.
He was perfect. Not only did my heart belong to him in a heartbeat, but he annoyed the hell out of my parents. I couldn’t have planned that better if I’d tried.

***
“Hey lady, I thought you were in a hurry,” the cab driver said, sounding annoyed and bringing me back to reality.
“Huh?” I asked, looking up from my briefcase.
“Barton & Associates? Isn’t this where you wanted to go?” he asked as he pointed to the building in front of us.
I looked over and realized we were sitting in the parking lot by the front doors. Somehow, in my daydreaming, I hadn’t noticed that we’d arrived at my destination.
“Oh dear God,” I said. “What time is it?”
“12:58 p.m.,” he said as he looked at the clock on the dash.
I grabbed my briefcase and my purse and jumped out of the cab in a mad dash to make it into the building and to Jed Barton’s office within the next two minutes.
I heard a car door slam behind me. “Hey lady, aren’t you going to pay me?” the cab driver yelled behind me.
I fumbled through my purse and found a twenty-dollar bill and threw it behind me without even looking to see if he caught it. Goddamn cab drivers trying to take advantage of people in the city.