You are here: Products Bearly Cursed (Fairy Tales with a Shift) by Cara Wylde 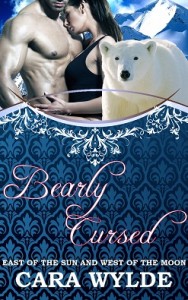 Bearly Cursed (Fairy Tales with a Shift) by Cara Wylde

Girls my age usually spend their days dancing, singing, and dreaming of Prince Charming. Not me. I spend my days hunting and praying my poor parents and my dear sisters survive another harsh winter.

I never expected to find the solution to all my problems in the cave of the white bear I was hunting. My parents will never starve again, and my sisters will get to live that life of dancing and singing, but there’s a catch: I must become the wild beast’s wife. Giving up my freedom, accepting I’ll never feel the warm touch of a man… it’s all worth it for my family’s happiness. So, I let the beast lock me up in its icy castle, and I get ready for a life of boredom and sacrifice. However, when my first night in the white bear’s home turns into a passionate encounter with a mysterious stranger, I understand my life will be anything but boring.

“Bearly Cursed” is a sizzling hot standalone novella that might just set your Kindle on fire.

She’s currently running some awesome exclusive deals and promotions, so sign up for her newsletter if you want to find out more: http://eepurl.com/ba4tAr

I’ve always wanted to write steamy retellings of my favorite fairy tales. “Bearly Cursed” is a retelling of “East of the Sun and West of the Moon”, a fairy tale which is very similar to “Beauty and the Beast”.

“You’re so beautiful. You’re the most beautiful woman I’ve ever seen…”
I moaned in my sleep.
“Skin so white and soft… lips so red and full…”
I was having the best dream ever. I had no idea who the man was, and I couldn’t see him, but his voice was mesmerizing. It all seemed so real that I could almost feel his big, strong hands caressing my breasts, his fingers finding my nipples and pinching them into hardness. I squirmed under the sinful touch and muttered in my sleep. My words were probably unintelligible, but in my head they rung clear and demanding: “please go lower”. I had probably figured out how to control my dreams, because the mysterious man did exactly what I wanted. Slowly, tantalizingly, his hands traveled down my stomach, reached my hips, then went under my butt for a nice, firm squeeze. It felt like he was kneeling between my legs, so I thrust my pelvis up, hoping he would get the idea and start doing more interesting things to my body. If he didn’t, then tough luck: I would make him, because this was my dream.
“You’re so responsive… Your body sings with passion.”
Oh, forget about the romantic talk, and just do something to alleviate the ache between my thighs! I jerked in my sleep, determined to make the best of my dream. I wanted to touch the man, pull his body over mine and run my hands all over his chest. The sole thought of hard muscles and soft skin under my fingertips made my hands twitch. I clasped and unclasped my fists, then reached for the delicious body hovering over me.
Something was wrong.
I sent the command to my stubborn hands again: reach for the man’s chest.
Nothing. My dream was broken. It was the only explanation for not being able to control it anymore. Stupid dream.
I moaned again, squirmed in bed, and somewhere between sleep and wakefulness, I tried to move my arms and turn on my side. I couldn’t. What was going on? Why couldn’t I move? And why did I still feel the man’s hands on my hips? I was pretty sure I was waking up. Unless I was still dreaming, this didn’t make any sense.
“So beautiful… my Brenda.”
My eyes snapped open when I heard the man’s voice clearer, louder, closer. I gasped when I saw there really was someone hovering over my helpless body, and I tried to lift my arms to hit him, scratch at his face, anything… but I couldn’t. Cold, paralyzing panic rushed through my veins when I realized my hands were tied to the headboard. What was worse, I had no idea who the man was. The room was drowned in complete darkness, which meant someone had covered the entrance to my chamber with the heavy curtain I had left open so the moonlight would make its way to my bed.
“Who are you? What do you want from me?” I asked him in a chocked, trembling voice. I took a deep breath and struggled to fight my tears.
“Shh, my beloved, you have nothing to fear,” he said. He had, indeed, the smoothest, most sensual voice I had ever heard. “I’m your husband. The husband who will share your bed.”