You are here: Products Bearly Breathing by Kit Tunstall 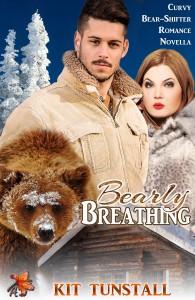 Shy and curvy Breanna is used to being overlooked, minimized, and ignored. She’s grown up in the suffocating household of her old-money parents and done her best to please them. Even her musical talent failed to do that, so she agreed to marry a man of their choosing in a last desperate bid to win their approval. Just weeks before the wedding, she runs away, knowing she can’t marry someone she doesn’t love. As she flees to her friend in Canada, she wrecks her car in the mountains. Rafe, the man who rescues her, is a bear-shifter wintering in his cabin. Snowed in together, the passion flares between them, and he soon realizes she is his mate. To keep him, Breanna will have to accept all of him—and stand up for her right to make her own decisions.

Slowly, she plodded through the snow until she came around the side of the cabin and froze. The sight that greeted her made her gasp softly. He stood in front of her in profile, stripped down to nothing but jeans, snow boots, and work gloves. The sheen of sweat made his bronzed skin glimmer even without much sunlight filtering through the overcast sky. Every muscle was exquisitely detailed and so perfect that any artist would have wept with gratitude to be able to sculpt or paint him.
She longed to be able to kiss him or run her fingers over his smooth expanse of flesh. Her panties were soaking wet in no time, and she was embarrassed both by her arousal and her inability to look away.
Suddenly, he froze, lifting his head. In a peculiar fashion, he drew in a deep breath before his head turned and his gaze locked directly onto her. She shivered under the force of the intense expression. Was she imagining that dark hunger in his eyes? She didn’t think so, but she was too timid to approach him to find out. Instead, she stayed where she was and nervously called out, “I just wanted to make sure you’re okay. You’ve been gone a while.”
“I’m fine.” He swung the heavy maul and wedged it into the large stump he used for chopping. The lithe motion made her gasp, and a new wave of desire flooded through her. She’d never seen anything so magnificent in her life as this man doing something so simple as cutting wood. Breanna realized she was holding her breath as it left her in a ragged exhalation when he turned to walk toward her.
There was purposefulness in his posture, and the way he held himself revealed determination and perhaps something else—something a little feral or wild. A tinge of fear made her spine tingle, but that was obliterated when he reached her, his hands fastening around her arms as he pulled her close.
Before she had a chance to question his actions, or ask what he was doing, his mouth was over hers. He didn’t kiss gently or sweetly. He marked and branded, kissing her thoroughly and deeply, as though determined to memorize every bit of her mouth.
After a second’s hesitation, passion she had never known spread through her, and she was eagerly returning his kisses with the same intensity. She was feeling rather wild herself, and she shoved back the voice of reason trying to admonish her behavior. It sounded too much like Estelle Dawson, and she was in no mood to have her mother ruin this experience.
Breanna lost track of how long they stood in the snow, mouths devouring each other. At some point, he backed her against the wall of the cabin, and she was vaguely aware of the rustic logs pressing against her back through the fabric of her coat and his flannel shirt. It was a minor discomfort, and she was easily able to block it out when his hands roamed over her body.
He made short work of the buttons on her coat, before attacking the buttons on his shirt she still wore with equal vigor. She was certain not all the buttons remained by the time the top was open to her waist, but she would worry about what to wear later.
Her own hands were busy roaming over his bare chest and back. He was hard and firm to the touch, but with supple skin that invited stroking. As her hand traced the arrow of hair leading down his naval, he growled low in his throat. It was a sexy sound, so she repeated the motion until he did it again.
He was rough and ferocious, but with a tender edge that gave her no fear. She hesitated for just a second when his hand slipped under the waistband of her pants and into her panties. The first touch of his finger against her clit did away with any uncertainty, and she arched against his hand. Rafe rolled her nubbin between his fingers, making her already-wet folds super slippery.
She ached to be filled and whimpered as she pressed against his hand. His fingers dipped lower in response, and he clearly realized what she wanted. A moment later, two of his large fingers surged inside her, but it wasn’t enough. She needed more as she arched against his fingers, rubbing her clitoris against the palm of his hand in her search for relief.
She’d never been so wild and out-of-control in her life. When she had sex, she did it like a proper socialite—quietly, politely, and without vigor. This uncontrollable desire was exactly what had been missing in her life, and the epiphany broke over her at the same time as an orgasm consumed her. She’d never come with a partner before, probably because she’d been too inhibited and focused on how a lady should make love, not on how she wanted to fuck.
There was a new hint of wildness and desperation in Rafe as her juices flooded his fingers. She could sense he was moments from pinning her to the cabin wall, stripping off their clothes, and surging inside her out here in the open, where anyone could see.
The idea should have shocked or outraged her, but instead, it only made her yearning that much more intense. “Rafe, take me now.”