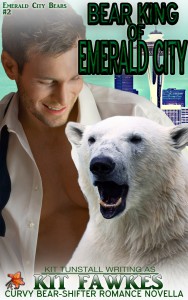 In Seattle for her best friend’s wedding, curvy Grace is immediately attracted to the best man, Kingston Meade. He’s equally interested in her, especially since his bear insists she is their mate. The attraction is undeniable, but she still doesn’t know he’s a polar bear shifter. There’s also the added problem of leucistic panther-shifter Ashley, who is determined to get her claws into Kingston, and she’s willing to slash Grace out of his life to do it. Will the bear king of Emerald City win and keep his curvy human queen?

A standalone novella with no cliffhangers.

Kit Fawkes is the pen name Kit Tunstall uses when writing steamy paranormal (especially shifter) romances. It’s simply a way to separate the myriad types of stories she writes so readers know what to expect with each “author.”

Kingston leaned against the doorway, a white robe held out to her. “Sorry. I was just waiting for you to come out. I had the hotel concierge secure this for you. I thought you might want to put it on and get out of that wet dress.” His eyes moved to her breasts, where the splotch of wine had spread across her left side, making her bra and beaded nipple visible on that side.
“Thank you.” She reached for the robe and started to slide it on over the dress, moved by his thoughtfulness almost as much as the lust she saw shining in his eyes. Breanna was right. He wanted her, and she wanted him.
It was an untenable position, simply because she wasn’t certain about indulging in a temporary relationship. What else could it be, with him living in Seattle and her in Calgary? She’d be the first to admit her job as a records clerk wasn’t exactly career material, and she wouldn’t be opposed to relocating to Seattle for the right man, but she still didn’t think the relationship would go anywhere besides the bedroom.
“Take off the dress first.” That growl was back in his voice, and his eyes had darkened again.
She shivered under the gaze, surprised to find her hands moving to the hem of her dress. She wasn’t really going to take off the garment standing in the open doorway of the ladies’ bathroom, was she? She hesitated with her fingers at the hemline, staring at him uncertainly.
“Please, take it off. I want to see you.”
Forgetting all about anyone who might come by, and already knowing she had the ladies’ room to herself, at least for the moment, Grace obeyed his commands. She wasn’t really the submissive type, but he was just so commanding, and that intense edge surrounding him made her want to do whatever he said. She pulled off the soggy dress and extended it to him to trade for the robe he had taken back. He held it carefully as he handed her the robe, his gaze not wavering from her body as she slipped on the terrycloth. She hadn’t tied the tie yet when he spoke again.
“Take off your bra.”
She stared at him, a new wave of uncertainty sweeping over her. Grace nibbled on her full lower lip as she hesitantly reached for the front clasp of the bra. It was one of her favorites, also a new purchase.
The creamy satin was light enough to be unnoticeable under the cream-colored dress, and it provided adequate support for her larger-than-average breasts, while still making her feel ultra-feminine with the pearl and bow accent, coupled with a flirty front clasp. Her hands shook slightly, with anticipation instead of anxiety, as she opened her bra, leaving the straps on her shoulders. Her breasts sprang free, and his deep inhale was gratifying to hear.