You are here: Products Bayou Whispers by Lauren Faulkenberry 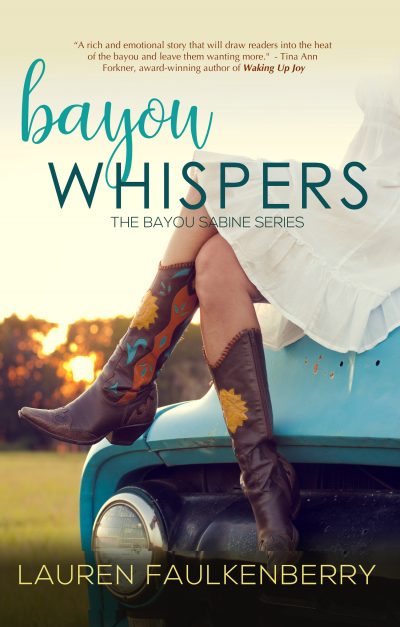 Thirty-one-year old Enza has finally found love with sexy firefighter Jack, and through him, she has gained a family, years after her mother abandoned her. With her friend Kate in town, Enza’s looking forward to her first Christmas in Bayou Sabine, surrounded by those she cares about most.

But instead, the holiday brings disaster. One guest puts someone Enza loves in danger, and threatens her bond with Jack. Another guest brings news that makes Enza question the circumstances surrounding her mother’s disappearance and doubt everything she believed to be truth about her parents. Enza, fleeing Jack and the turmoil in Bayou Sabine, sets off with Kate on a road trip that could bring her solace—or might destroy everything she’s built.

Will she put to rest the mystery of her mother’s disappearance and find the strength to accept the truth? Can she return home in time to save everything that’s important to her and salvage her relationship with Jack?

“Bayou Whispers is a rich and emotional story that will draw readers into the heat of the bayou and leave them wanting more.” –Tina Ann Forkner, award-winning author of Waking Up Joy

Lauren Faulkenberry is author of BAYOU MY LOVE, BAYOU WHISPERS, BACK TO BAYOU SABINE, JUST THE TROUBLE I NEEDED, and BENEATH OUR SKIN (all from Blue Crow Books).

Lauren divides her time between writing, teaching, and printmaking. Originally from South Carolina, she has worked as an archaeologist, an English teacher, and a ranger for the National Park Service. She earned her MFA in creative writing from Georgia College & State University, and her MFA in Book Arts from The University of Alabama. She was a finalist for the Novello Festival Press First Novel Award, won the Family Circle short fiction contest for her story "Beneath Our Skin," and was nominated for an AWP Intro Award. She's a sucker for a good love story and is happiest when she writes comedy and romance.

She lives in North Carolina, where she is at work on her next novel in the Bayou series.

All of the books in the Bayou Sabine series can be read as standalone novels–once I wrote Bayou My Love, I fell in love with the characters. There's some complexity in their lives that didn't end with the last page of the first novel. So I really wanted to keep writing about these characters. Sometimes the end is just another beginning, and that's how I felt at the end of Bayou My Love. Enza and Jack found one ending, but the story doesn't stop there. There's a mystery entangled in this love story, and a bit of a family saga too–and that was going to take me more than one book to dig into and resolve. I fell in love with the setting, too, and wanted to pull more characters into the series as it moves forward. We meet Kate and Andre in Bayou Whispers, and their story will continue, too.

This year was also my first Christmas with Jack. So I wanted everything to be as close to perfect as it could be. “Perfect” was a tall order, but I hoped for it regardless. Jack parked behind the house and strode up to the porch, his dark hair standing out in tufts. He was wearing the same jeans and navy blue T-shirt he’d left the house in the day before. I never tired of watching his slow, easy swagger, the way he fixed his eyes on me like there was nothing else in his field of vision. He moved with more grace than I’d expect from a man so tall and muscular. “Hey,” I said, stapling the next section of lights into place. He stopped at the ladder and slid his hand along my calf. “Hey yourself,” he said. “Are you getting in the spirit?” “I’m trying, but it’s hard when it’s eighty degrees outside.” I climbed down the ladder, pausing on the bottom rung so I could look him in the eye. As he pulled me close for a kiss, I tangled my fingers in his hair. When I finally let him go, he said, “I think you might have missed me.” “You have no idea.” He lifted me off the ladder and set me down in front of him, leaving his hands cinched around my hips. “Can’t believe you’re not sick of me yet,” he said. “That’s the damnedest thing.” I shrugged. “You keep this place interesting.” He laughed, swatting me on the behind. “I’m going to get cleaned up. Then I’m making you dinner.” Of the two of us, Jack was the better cook by far. I’d occasionally cook, but Jack, having been raised by spice-loving Cajuns, easily put my dishes to shame. He’d humor me and eat what I made, but most nights he offered to cook, saying it relaxed him after a long stint at the firehouse. Apparently all of the firefighters at his engine were excellent chefs, always trading recipes and preparing meals for each other during shifts. “No fires this time?” I asked. “Nope, just some training sessions. Hence the desperate need for the shower.” As he stepped inside, I called after him, “You want some company?” “When have I ever said no to that, chère?” He stripped his shirt off and tossed it at me. I draped the string of lights on the ladder and followed him into the house. He wrapped his arms around me, squeezing me against his bare chest. I laughed, squirming as he tickled my sides, but then his grip tightened. Nuzzling my ear, he said, “When’s Kate coming? Tomorrow?” “Yeah,” I said, giggling as he tickled my neck with his stubbly cheek. “Perfect. One more night to ourselves.” He scooped me up over his shoulder and headed for the bedroom. “Jack! Put me down!” He laughed, his feet thumping on the hardwood. “No, ma’am, I’m afraid I can’t do that.”
* * * Later, I lay next to him, sliding my fingers through his hair. It was soft as a rabbit’s fur and nearly black in the dim light. “I’ve been thinking about Christmas,” I said. “Hmm,” he replied, his eyes closed. “How about we ask Josie and Buck over here for dinner?” “They usually do it at their place. Josie likes to go all out.” “I just thought it’d be nice to have them over here, after all the help they’ve been.” “She loves hosting,” he said. “Sometimes my cousin comes down, and she always asks the guys from the station that don’t have anywhere to go.” “We could have all of them here too,” I said. “And I was thinking of asking my dad to come out. It’d be nice if they all met each other.” He opened his eyes, his face still buried in the pillow. The dark blue of his eyes still startled me. “Your dad?” “I know,” I said, rolling onto my back. “But you two met under extremely stressful circumstances. I’m sure you’d get along in a normal situation.” His eyebrow arched. “Your dad hates me.” “He doesn’t hate you. He hates that I moved in with a man he doesn’t know.” His eyes narrowed. “Please,” I said. “I really want you to spend some time together. You’re an important part of my life, Jack. And I’d like to mend things with my dad. He’s the only family I have.” He slipped his hand over my hip and leaned over to kiss my forehead. “OK,” he said. “I’ll tell them.” I ruffled his hair until he smiled. “But he’s not staying here,” he said. I frowned. “I don’t want your father plotting how to kill me every night when you and I retire to the same bedroom.” I laughed and swatted him with a pillow. “And I’m not sleeping on the couch with Bella,” he said. “Fair enough.” He sighed and pulled me close against his strong chest.