You are here: Products Bastien’s Bite by C.A. Worley 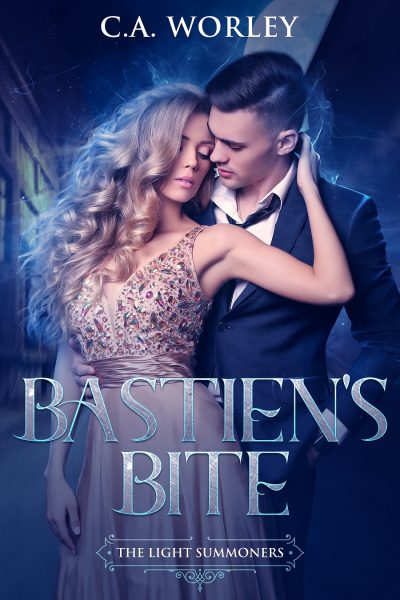 Alina Ray has always lived quiet life. When she starts having problems with a group of creepy supernaturals, she turns to her witch friend, Shane, for help. She never imagined his solution would be to push her into the arms of the city’s most powerful vampire. Will Alina resist what’s offered, or will she fall prey to Bastien’s bite?

Bastien James has been living the high life. He has money, power, and a different female on his arm every night. When he meets Alina, he realizes his life has had no real purpose. Keeping her safe seems to be his new reason for living. Bastien plans to help Alina navigate her new reality—for the rest of their immortal lives.

Each book in this series can be read as a standalone and comes complete with lots of steam and a HEA.

C.A. Worley is the alter-ego of Romance Author Cass Alexander. Where Cass tends to focus on humor in her publications, C.A. loves to write fantasy. She chose to write under the two different monikers so as to not confuse (or tick off) her readers.

C.A. currently resides in the Midwest, but was born and raised in the South. She spends her days working from home and her evenings are spent shuttling her kids to and fro. Her dinners are subpar, but she makes a mean dessert.

When she's tired of living her sons' travel sports schedules, C.A. enjoys a glass (or four) of wine. She needs the liquid courage to click the publish button for her fantasy romance novels.

Her motto is, "Be Brave," and she tries to live it every day. It takes a healthy dose of courage to get through this thing we call life.

I've recently fallen in love with reading paranormal romance and wanted to try it. I've had some success with my fantasy romance series, Fate of Imperium, which is set in a pretend world. I really liked one of my characters in it, who happens to be a vampire, and wanted to explore more of the vampire experience. This series is about vampires and their mates, but it's a modern setting. I wrote these to be quick-n-dirty, fun books.

The entire alley started to slowly blur, like a fog was rolling in. I couldn’t hear them, but the creatures maws widened and I knew they were making that horrible screech I’d only heard once.

Suddenly they were gone and I exhaled in relief. A minute later, all thee fighters were walking into the room, looking no worse for wear.

Aside from Shane’s torn charcoal shirt, none of them had a mark on them. I wanted to go to Bastien first, which was crazy. I hardly knew the male.

My best friend opened his arms and I ran into them. A low growl vibrated through the room, followed by a quiet oomph.

When I looked over to Bastien, he was rubbing his ribs and the female was looking mildly annoyed. I ignored the urge to throw myself at the sexy male vampire.

“You shouldn’t have gone out there. I told you they were dangerous.”

I stepped out of my friend’s embrace. “Thank you for helping him, Bastien. And you, too, uh, sorry, I don’t know your name.”

“Oh.” I didn’t know what else to say. Her tone was clipped and I got the feeling that was just how she was, blunt and to the point.

I was starting to sweat again and I rubbed the back of my neck. “I don’t feel so well.”

I stepped closer to the couch and suddenly Bastien was there, pulling me to him while barking at the other two to leave the room.

Because I’d shut my eyes, I didn’t see them go. I was too busy concentrating on my uncooperative body to worry about it anyway.

My hand found the skin of his forearm and my mind settled. Bastien was fast becoming my lifeline.

“I didn’t take enough of your blood.”

“What?” I mumbled, my face in his chest.

“You’re overloaded with excess energies and your bone marrow is producing more blood than your body can handle.”

“Is that why biting me helped?”

“Yes, only I didn’t take enough. I should have taken more but I didn’t want to without your permission.”

“You bit me without permission, stopping my seizure, so I doubt I’d have said no to you taking more.”

He laughed darkly. “Oh, little dove, do you not know what happens when a vampire feeds for longer than a minute or two?”

I’d heard it could be highly pleasurable, but I’d never spoken in detail to anyone who’d been bitten. Shane was my only real friend and all he’d ever said was it was worth the effort to be on the receiving end.

I shook my head.

“Would you like to find out?” his asked, his voice dropping an octave.

My core heated to a boiling temperature and my chest heaved for air. Gods help me, but I did. I did want to find out.

I could rationalize it was because I wanted his help to stave off my seizure. That was part of it. The rational side of me was flashing the green light for this very reason.

The other part? Well, that was the part that hadn’t had sex in two years.

I wanted to feel his unspoken dark promise. Like a moth to the flame, I was inexplicably drawn to him.
When I’d come to on the couch, I’d been aroused. I was turned on before I’d seen his stunningly sharp features, his bright green eyes and his midnight hair.

His gentle touch and care for me confirmed he would not harm me. When I’d touched his face, my mind was calm and I felt like I could look at him forever.

Before he touched me again—because I was going to let him if he still wanted to—I needed to warn him of my curse.

“You should know that when my skin comes into contact with someone else’s I get, ah, visions. Like pictures of their future.”

Bastien didn’t seem at all surprised by my confession and some of my anxiety over telling him eased off.

“Did you pick up anything when I drank from you?”

His emerald irises blazed and I licked my lips. “Then I’m thinking I’m immune to it. So I’ll ask again, do you want to find out what it’s like to be bitten? This time while you’re fully aware?”

“Yes,” I whispered, wanting him with a fierceness I wasn’t going to question right now.

A clicking purr of pure male satisfaction emitted from his chest. He fisted my ponytail and angled my face. I was surprised when his mouth pressed to mine instead of to my neck.

His lips were salty sweet and I hummed with approval over their flavor. His tongue demanded entrance, which I avidly gave. I was so enamored, he could do anything right now and I wouldn’t stop him.

Suddenly I was off the floor, lifted into his arms and moving. I felt us lower to the couch, never breaking the kiss. I was straddling his lap, my dress practically up to my waist.

I wiggled, settling my core over his hardened length. I shamelessly rocked my hips and we both moaned. I was on fire. I needed more so I rocked again.

He tore his lips from mine and I whined. Bastien’s chuckle did things to me and I wanted to please him even more.

He trailed scorching kisses across my jawline and down my throat. He licked and sucked at the skin on my neck. My hips gyrated in the same rhythm as his mouth.

“Bastien will do, Dove.”

“I love my name on your tongue. Be a good girl and say it when you come for me.”

Be the first to review “Bastien’s Bite by C.A. Worley” Cancel reply