You are here: Products Barton Hollow by Stella Stoker 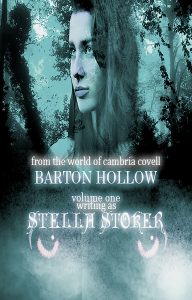 From author Stella Stoker comes a sweeping, paranormal romance full of vampires, werewolves, and witches. A weekly, serialized novel that will have you craving each new chapter in this epic saga.

Eighteen year-old Allegra Fleur has grown up hearing tales of the mysterious Barton family from her grandmother. She’s been obsessed with meeting them her entire life. Even if her mother insists the Bartons are nothing but trouble. However, after her mother dies in a car accident, Allegra finds herself thrust into the Barton’s world. Barton Hollow is small, consisting of the old family estate, and the few surrounding neighbors. The moment she arrives, Allegra gets a vague warning from one of them.

I am an enthusiast of the weird, whacky, and wonderful. Vampires, werewolves, witches and everything in between. My stories tend to run on the dark side but I try to look for the light in things too.

I was posting bits of novels on facebook and wanted to be able to put something out right away. So I wrote something that I loved, and put it up.

I had no memory of going into the woods. But I knew that was where I was by the feel of the pine needles in underfoot, the surrounding trees, wet dirt, and the cold. My shoes had been misplaced somewhere. I had on no jacket and the snow from earlier lightly covered the ground.
I walked through the forest, trying to find my way back to Grandma’s house. A snapping of a twig made me jump. I turned to see a tall, dark haired guy with yellow eyes standing before me. He wore a grey t-shirt, along with a tight, leather jacket. “A pretty little thing like you shouldn’t be alone in the woods at night,” he warned.
“I’m not that little,” I told him, “and really, if anyone shouldn’t be out in the woods it’s a creepy lurker guy.”
He chuckled. “To be fair, I’m a resident. You’re not. I would know. I’ve seen all of the pretty girls in The Hollow. And I haven’t seen you before.”
I tilted my head to the side. “Well, well, well. Aren’t you the charmer?” “You’re lost, aren’t you?” he said.
I glanced around, only to find more trees. The cottage as well as the main house was nowhere to be found. “Alright smart ass, how do I get back to the Barton place?”
The stranger cocked his head to the side. “Now, what’s a pretty girl like you doing hanging around a place like that?”
I bristled at his words. It annoyed me that he thought there was something wrong with the family mine had taken care of. It was weird, I know since I hadn’t even met them. But I felt inclined to be protective after growing up with their stories. “My grandmothers the grounds keeper.”
“Oh, you mean Teresa?” he smiled. “She’s a lovely woman.”
“Very,” I agreed.
A few white flakes had started falling again, and I shivered. He shook his head, taking off his own leather jacket and giving it to me.
“You certainly aren’t from around here. No one goes out into the woods without a jacket. Listen, pretty girl, there are some rules you need to know if you’re going to survive. And I so hope you do, because we could use some fresh meat in these parts.” “Fresh meat?” I said, pulling my hair out of the back of the jacket.
“Yes,” he smiled, revealing sharp, pointed teeth that reminded me of fangs. “There are three rules to surviving Barton Hollow. The first is don’t trust the werewolves. The second is don’t trust the werewolves. Third, don’t go into the Barton house. And fourth, don’t trust the Grave Keeper.”
“That’s four rules. Do I just follow the first three? And don’t you mean the grounds keeper?” I said, offended on my Grandma’s behalf.
“No. You should follow all of them. I simply forgot to give you the most important one. Bad memory, you see. It happens when you’re old” he explained, “your Grandma’s alright. She’s neutral. But the Grave Keeper, he’s bad news.”
I laughed. “You don’t look old, but you sure do sound like an insane old person.”
“Don’t I know it, pretty girl. But that don’t mean I’m not right. Now, if you keep on walking in the direction of my tracks you’ll find your way back to where you need to go. Have a good night, and stay out of trouble. Be seeing you around, I expect.” The handsome stranger nodded curtly at me. Before I could say or do anything he had vanished disappearing into the deep, dark trees.