You are here: Products Bar Fights and Blue Birds by Grace Risata 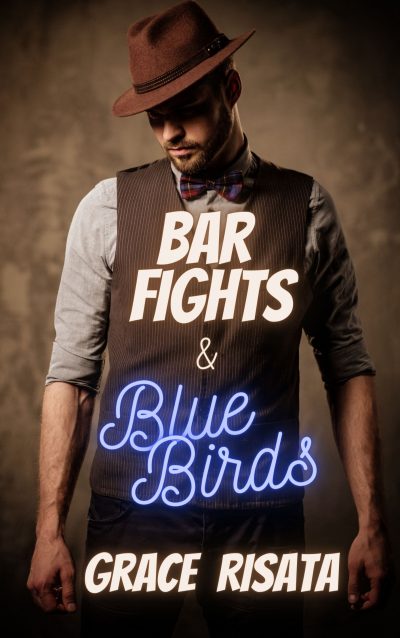 Let’s just say, hypothetically, that you found out you were living a lie. The father you thought had died before you were born… well, he’s alive and ready for a meet and greet.

What would you do?

If you were me, you’d go on an epic cross-country road trip in order to learn the truth.

Along the way, new friendships are formed with unlikely allies, a few enemies are made, and there’s definitely more than a little romance… but that’s to be expected, right?

They do say that getting there is half the fun…

I would first and foremost like to thank everyone for taking the time to give my stories a chance. My goal is to take you out of your world, and all the stresses that go along with everyday life, and bring you into my world of romance and humor. I have a special weakness for hot alpha males and the feisty heroines who love them. Above all else, I hope you got a laugh out of my book. I aim to incorporate as much comedy into my romance as is humanly possible.
My professional biography is as follows (I’m not sure why it’s in the third person, evidently that’s the rule): Grace is happiest when reading, eating Portillos hot dogs, and patiently waiting for the inevitable zombie apocalypse.

“Excuse me, but do you know what time the band comes on?” a deep and husky male voice questioned, causing me to snap my attention away from the beer I was holding.
At first, I assumed I’d be face to face with Derek pretending to have a sexy voice to try and flirt with me, but that was not the case.
Not at all.
I found myself staring at the most beautiful pair of brown eyes hidden behind black glasses. They bore into my soul as I gave the man an appraising glance. Dark blonde hair was neatly held in place, a slight growth of facial hair appeared to be well-trimmed, his warm smile showcased the tiniest hint of a dimple, and broad shoulders filled out a tight dress shirt covered by a nerdy brown vest and bow tie.
Yes, you read that correctly.
My new Mr. Right wore a bow tie and vest paired with khaki pants. His combination of ‘nerdy professor’ mixed with ‘tall and handsome’ to create the perfect blend of spices necessary to become marriage material.
I blinked a few times and studied him, taking in every last detail, when he cleared his throat uncomfortably and repeated his question.
“The band?” he stated gently, as though speaking to a skittish child. “What time do they start?”
Oh. He was probably just here to see one of the group members.
“Nine o’clock,” I replied suavely. Way to flirt, dipshit. If you want to have an actual conversation with another human being, maybe it’s a good idea to ask him a question so he’ll keep talking.
What’s something people say to break the ice?
While I struggled to give the impression I wasn’t a moron, my mystery man took the lead.
“That’s cool. I saw some posters around town and figured I’d check it out. Have you heard them play before?”
Damn. Now that’s how you make small talk. He’s good. Surely I can say something intelligent now.
“Yes.”
Shit.
The man cocked his head and a tiny smile formed in the corner of his mouth.
“I’m not the best at approaching beautiful women in bars, as you can tell by my lack of a decent pick-up line. I guess I’ll try being honest and see if that works,” he explained, pausing to run a hand through his hair as though nervous. “I’m just in town for business and hadn’t planned on staying very long. Unfortunately, my car broke down and the service station needed to order a part that was out of stock. It looks like I’m stuck here a few days, so I thought I’d grab a burger at the local bar and maybe catch the live band. A raven-haired stunner caught my eye… so I figured I might as well strike up the nerve to approach her. Is that okay?”
Holy shit. This charmer was actually putting the moves on me!
Part of me wanted to pinch my arm to see if I was dreaming, but that wasn’t possible because my skin was protected by a thick layer of black leather from my borrowed jacket. Ah, yes. Tonight I was playing the part of edgy bad girl rocker chick.
No wonder my mystery man was so hypnotized by the sight of me… I radiated ‘sex on legs’ instead of the watered down version of myself presented to the world on a daily basis.