You are here: Products Bang! You’re Dead by Debra Salonen 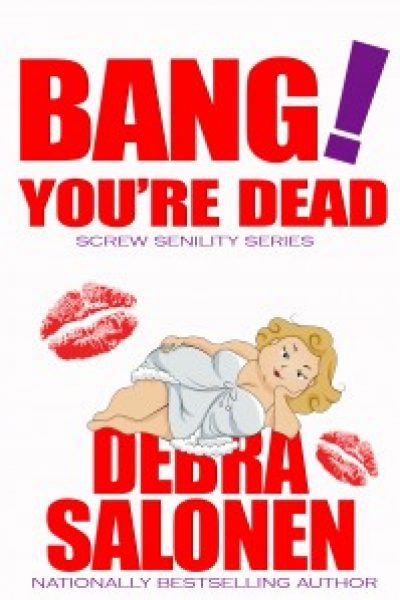 Judy Banger is done apologizing for her name, her weight and her sexuality. She is sorry–really sorry–about Buddy Fusco–the dead guy in her bed, but she didn’t see that one coming…probably because she was too busy um…you know…to notice the exact moment he kicked the proverbial bucket. Does that make her a bad person? Or is she simply someone who’s played by the rules too damn long and is fed up with where being good has gotten her. She’s ready to be bad…or, at least, very naughty.

Debra Salonen is a nationally bestselling author with 26 published novels for Harlequin’s Superromance and American lines and one single title release with MIRA. Several of her titles were nominated for “Best Superromance,” including UNTIL HE MET RACHEL, which took home that honor in 2010. Debra was named “Series Storyteller of the Year” in 2006. Her current Indie publications include ARE WE THERE YET? — one woman’s funny, quirky, risqué journey of self-discovery on the road to love, a foursome of naughty novellas in her Screw Senility series, several short pieces, including a sweet “love story–not a romance” called A HUNDRED YEARS OR MORE, and CELEBRATE!–a newly released holiday anthology with four other authors.

Very liberating, I must say. I hope the fun I had writing this series shows in the books.

Be the first to review “Bang! You’re Dead by Debra Salonen” Cancel reply