You are here: Products bad Jenny and the Therapist by J.Z. Dietz 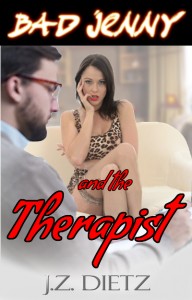 bad Jenny and the Therapist by J.Z. Dietz

Trouble seems to follow pretty young Jennifer Conners wherever she goes, but it’s never her fault, as she would be happy to tell you. Now, a side of the road sexual encounter with a highway patrol officer has placed

her in the sites of a vengeful District Attorney with an agenda. When Jenny is forced by a misguided judge to receive counseling from a psychotherapist as part of a preliminary plea bargain agreement, she finds

herself with an unhealthy obsession.

Follow Jenny as she navigates through her life in the wake of her encounter with the highway patrolman, her obsessive behavior wreaking havoc on the lives of those about her. Will the therapist get Jenny to take

responsibility for her actions or will she manage to seduce and corrupt him just like the others, another victim of her out of control life?

Warning, this book contains explicit sexual content. Lots of it.

I have always enjoyed reading, and I read a few self published erotica authors who seemed to be doing really well and thought to myself, I can write like that.

I went into ‘Doctor’ Monroe’s office and closed the door behind me, he was dressed almost exactly the same as last week except his shirt was pale blue instead of pink. He was making notes in a file and he closed it and got up to shake my hand and asked me to sit down and I sat in the middle of the leather couch again and crossed one leg over the other, watching him.
We exchanged the usual pleasantries and then he gave me a ‘friendly reminder that I should be looking at my time with him as a chance to grow and overcome any issues that might be holding me back in my relationships, both professional and personal.’ I assured him that I was and managed not to roll my eyes and in turn he looked at me like he didn’t believe a word I was saying.
“Here’s the thing Jenny,” he said, “I think you do have some pretty serious issues, just in the short time we’ve talked it’s pretty clear that you often act in ways that are socially questionable. You’re obviously a very smart young lady, and because of that you’ve managed to do pretty well for yourself, but I want you to think about how much less stressful your life could be without all these dramatic situations you find yourself caught up in constantly.”
He pulled off his glasses and gave me want I’m sure he must have thought of as a serious look. It occurred to me the glasses might be fake.
He looked down, disappointed I guess when I didn’t say anything, and then put his glasses back on and continued, “Let’s try a different track. Do you feel compelled to do certain acts a set number of times, or do you count things, like words you are speaking or how many steps you are taking like maybe going up or down a stairway?”
That was stupid, “No.”
“Do you obsess over certain things, where you can’t get them out of your mind?”
The cops leather boots flashed through my mind, “No, not really.”
“Not at all? The reason I am asking these questions is because I think it’s possible you have obsessive compulsive tendencies.”
This was bullshit, I uncrossed my legs and leaned back into the couch, staring right into his eyes while opening my knees and using my fingers to draw my skirt up so he could see my panties.
“The only obsession I have is seeing your cute face down between my legs,” I said.
He stared back into my face, never once dropping his eyes down to my crotch.
“This is exactly the kind of behavior that I was talking about earlier,” he said. “I’ve said something which subconsciously you cannot allow yourself to consider might be true because it would challenge all of your belief systems, so you react offensively to cause a dramatic scene and avoid the uncomfortable topic. I want you to think about that, maybe not right now because you are probably angry with me for suggesting it, but later when you’re alone and have some time to put it into perspective, Ok?”
I still had my legs open and I hiked my skirt up higher and put my hand down between my legs and ran my finger along my slit from outside my little silk panties.
“I’m serious,” I said, “I really want your mouth down there.”

Be the first to review “bad Jenny and the Therapist by J.Z. Dietz” Cancel reply