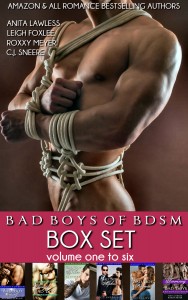 From Amazon & All Romance bestsellers the Wild & Lawless Writers!

Stories so dirty and hot, your ereader may not survive!

All stories have an extreme heat level.

Excerpt from Claimed by the Bad Boy:
She watched his finger, and then her steely stare locked on his ice-blue eyes. “Why would you care whether I had changed or not?” Her voice was low, and Corey thought he heard a hopeful, anxious lilt to it. Perhaps wishful thinking on his part but, at this point, he’d take any scrap as a sign. He wanted her back so badly it hurt right in his gut just to look at her.
“Do you remember what I told you when you left me?” Corey moved his face closer to Bekka’s. Their lips were now inches apart. “Just before you walked out the door?”
He heard her swallow and her breathing had grown shallow. “What…”
Taking her into his arms before she could resist, Corey nipped at the shell of her ear, flicking his tongue inside before he whispered, “What I promised you?”
Bekka cleared her throat, but her voice was still thick when she spoke. “That you’d come find me one day. That you’d get me to come back to you, no matter what—”
He stole the last of her words with a deep, hungry kiss.
Bekka shoved him back and Corey looked at her with a puzzled frown.
“Wait a second.” Bekka glanced at the clock. “Isn’t it a bit early to be closing up a tattoo shop, Corey? Are you sure you didn’t set this up on purpose?”
His mouth still hovered close to hers and, while staring at her lips, it was hard to comprehend her words through his fog of desire. Corey shook his head. “What?” He followed her gaze to the clock. “Ohh…that.” He turned back to her, pinning her once more with those intense, blue eyes of his. “The shop isn’t technically open yet. Me and Jamie are in the process of getting things set up. We’ll be opening on Friday.” He yanked her back into his arms and Bekka let out a surprised yelp. “And quit trying to change the subject.”
Bekka let herself dissolve into his kiss. Damn, it did feel good to be back in his arms. She hadn’t had a lot of men before Corey. She was skittish when it came to males, after suffering years of mental and physical abuse at the hands of her father as a teen. Still, she was no innocent when it came to pleasing and pleasure. Corey, much more experienced in sexual matters than she was when they first met, had taught her a lot in their three years together. They’d been best friend with incredible chemistry—a rare combination. And that chemistry only blazed hotter now that they had been apart for so long. At least it did on Bekka’s part, but she tried to hold her excitement back some. It was all she could do not to tear his clothes off as she helped him out of them.