You are here: Products Backseat in The Dark by Milton Dewar 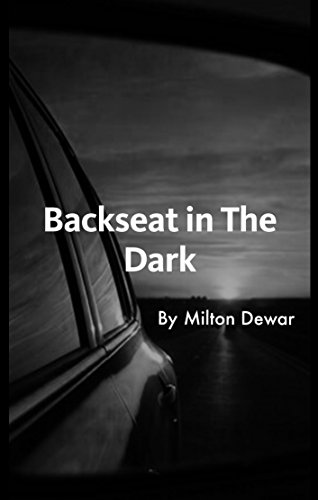 Backseat in The Dark by Milton Dewar

An about-to-be ex-husband is forced to confront his own demons, and something far worse, on his way back home, on a lonely stretch of road.

Milton Dewar is an award winning Writer, Director, and Producer, who has worked with some of the largest media organizations in the entertainment arena. He is also a seasoned Music Producer, as a member of the Grammy nominated music production team, "The Arkatechz."

I started writing from a very young age, due to my love of comic books. I loved the stories, and it got to a point where I wanted to tell my own stories in my own way. This book was inspired by the pervasive fragility of the human condition, and how what we go through as people, perpetually shapes that condition.

“You fuckin’ bitch, you FUCK-ing bitch. Motherfucker.” That’s what muttered out of my mouth, as I was meandering through the forest-like backstreets of Fayette County, Georgia. I didn’t even have the radio on, I just had the driver and passenger seat windows cracked. Just low enough to hear the crickets whenever I had to stop at an intersection on the way home. I really liked the sound. There was something soothing about the chirping in the wee hours of the night; like…repetitive notes, bowed on a…special kind of violin. I couldn’t tell you what the violin looked like. But the crickets just weren’t doing it for me this time around. The chirping was nothing more than a metronome for the drumming of a thunderous heartbeat; the soundtrack for a swelling anger, starring yours truly.

I’ve never smoked a fuckin’ day in my life, but I felt like I needed a cigarette, after being blindsided and embarrassed at work. It was that bad. You can do whatever fucked up shit you wanna do to me, but don’t ever fucking embarrass me. Don’t embarrass me, Jill. Okay. Maybe I was exaggerating a little about the “You can do whatever fucked up shit you wanna do to me” part, but the embarrassment part? No, no. No exaggeration. Don’t do it. In the farthest recesses of my mind, that shit takes me to a special, homicidal place, where I wind up dying in a shootout with the police, after refusing to go quietly for the crime. Not saying that I would ever actually take it there, but if I was a different kind of person? There’s no telling. I swear to God, I just…Jill. Jill must’ve been trying to turn me into that person, when her process server showed up at my job. I got served right in front of the receptionist, on my way to the restroom. “Ian, you’re getting a divorce?” I
didn’t even hear what Julia asked me, because my ears started ringing as soon as I got slapped with the paperwork. I was stunned. Stunned to the point that I forgot I had to use the bathroom, even though I really had to go. Too stunned to even notice the several heads that popped out of their cubicles in the office, like meerkats sticking their heads out of their holes in the savanna; they just had to know what was going on. A secret that I dearly would’ve wanted to keep, got out. In real time. Jill and I had been going through some things for a while, but I never saw a divorce coming.