You are here: Products Back to school by Adam Bennet 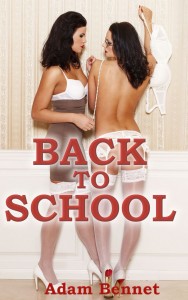 Back to school by Adam Bennet

Jason returns to work in his hometown after completing his college degree, to be close to Janet, the English teacher he fell in love with when he was at school. He hopes that he can have a relationship with her, but is devastated to find that she has divorced her husband and is now in a relationship with another woman, Alice.

Undeterred, the three begin to socialize with each other and soon both women find that they are attracted to Jason.

Janet decides that she wants to be with Jason, but is reluctant to tell Alice. She confides in Jason, that she doesn’t believe that Alice is a lesbian and has been deluding herself. She believes that Alice is straight and only needs to meet the right man. In the meantime Alice has also confided in Jason, telling him she thinks that he could make Janet happy. But there is a catch. And in order to get Janet, Jason must first satisfy the lust of Alice.

Adam Bennet loves good food, good writings and stories in his head. While he still enjoys real fencing occasionally, he believes that a grown up man can still wear Doc Martens. Adam Bennet also believes in a world where is possible to explore the world and passionately write erotica. In a world where male writers don’t need to change sex to get to their readers. That a glass of wine is not a drink, but a part of dinner, and that the cigarettes are not the worst thing that is happening to humanity.

Old memories about my high school

That day when he got back to school, he felt his knees become weak. He stopped at the bottom of the stairs, lit a cigarette and looked at the familiar building. He spent four years in that building and then went to college. After several crazy years, he decided to come back to his hometown. He didn’t have to, he had a few interesting job offers, but he was determined to spend some time in the city where he grew up. There was no dilemma about where he would work. He knew it would be his high school.
He didn’t spent much time thinking about it, didn’t bother explaining his decision to himself. On the surface of his rational thinking, he believed that it was because he wanted to give something back to society, to teach new generations, because he loved his city… Those were all real reasons. But that day, while he was standing in front of the stairs, listening to the sound of his beating heart, he finally admitted the main reason to himself. It was Ms. Wells, his English teacher. He realized that the real reason for his shaking knees was not happiness because he was going back to school. The real reason was true cognition that he would see her again after so many years.
He grew up with her, she was a part of developing his personality and, on some level, she was also responsible for forming his sexuality. All of his girlfriends had something of her in themselves. Her hair, lips, posture, similar body part… He searched for something of her that he was able to see in them. He could still vividly remember the moment when he saw her the first time. He was fifteen, his biggest fun was still chasing between school desks with his friends and making clumsy attempts to tease girls. And then she came into his life. She stepped into the classroom and with a calm voice ordered them to sit in their chairs. With eyes wide open he watched her walk across the classroom to her desk, leisurely swinging her wide hips. She stood next to her desk, and while she was fixing hair with her hand, she looked him straight in the eye. That was the first time he felt his knees become weak because of her. He realized he was the only one to remain standing. But he couldn’t move. She wasn’t reproving him, she didn’t say anything. She just smiled, as she understood, and then took her book and started with her lecture. He sat in his place, without realizing that nothing would be the same anymore.
Somehow, he wasn’t chasing boys in the classroom, and he started to look differently at the girls around him. He wanted to be more mature, somebody whom Ms. Wells would not see as just another kid who runs through school corridors. The same went for girls in his class. He stopped playing silly games with them, stopped mocking them. He realized that there were many other better ways to get their attention. They were the same as his new teacher, he realized that then, and kid’s games were not a good way to approach them.
But still he was looking at his English teacher before any girl his age. He impatiently waited for her classes and always sat calmly in his chair when she entered. He wanted to give the impression of maturity, but also, it was better that he wasn’t standing. Hormones were at rage, and every time, even before she would enter the classroom, he got a huge erection. His penis was proudly raised the entire time she was in the room, and it would be very visible if he stood. He didn’t know what to do about it. Trying to turn his eyes off of her didn’t help, even in times when he was able to do that. He was watching her breasts, how they drifted freely left and right without a bra. How all her curves were moving while she was writing on the board, he felt the power of her strong thighs while she passed beside him. A few times he felt like he would pass out when she stood next to his desk, her perfume intoxicating all of his senses.
He had a problem with his constant hard-on, as Ms. Wells loved her students to stand up while answering. When she made him stand for the first time, he tried to clumsily cover his crotch with a hand. He thought that she noticed his erection and saw her eyes got wider because of it. And he was right. She couldn`t hide her soft smile when she saw it.