You are here: Products Back to Another World by Bartosz Labuc 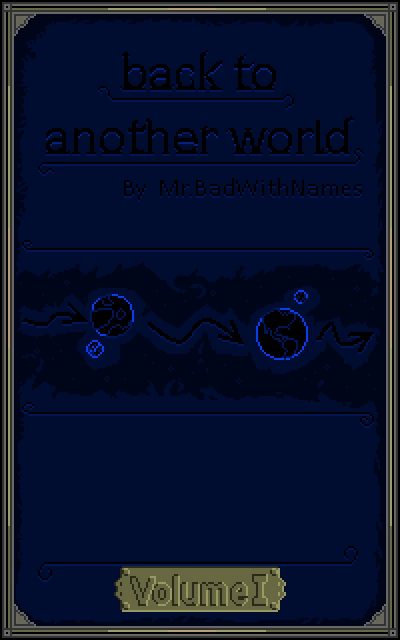 Back to Another World by Bartosz Labuc

What would you do if you found out that after death, you will be reincarnated in another world? What if you found out that it has been like this since the beginning of time? Wouldn’t you be filled with an existential dread?
The story follows the adventures of a man who died on earth only to reappear in another world, with magic and castles, they will meet a cast of characters that are vaguely qualified to actually deal with this world, some who also remember being reincarnated.
As the world is plunged into chaos by mysterious forces, the main character will use the power of magic, guns and sarcasm to try and survive in this new world.

I've recently discovered that writing is a lot more fun than programming, seeing as I'd love to do this for a living I decided to practice a bit online on websites like webnovel and wattpad, despite not garnering much attention over time my stories seemed to have pretty good review!
I finally decided to write a book, I decided to play on my strengths and make it a fantasy-comedy series.

Right now, since volume one is published, I'm working on volume two!

Various books, comics and anime.
It's a bit of a trope at this point, good guys dies and appears in another world only for him to become super heroic with a harem of women,
I decided to deconstruct this idea a bit, the main character gets reincarnated as the opposite gender, there goes their harem, the character themselves is extremely lazy, unmotivated and kind of depressed.

I always wondered what death felt like, I was disappointed to discover that ‘felt’ may be the wrong word to describe it, it was like the feeling of your entire body falling asleep, you can’t see, smell, hear or touch anything.

The blinding light I noticed after seemingly hours of sitting in silence was the sun passing through lime-green leaves of a large tree, I found myself in what looked like a field of some sort, coated in tall strands of vibrant green grass and bright blue flowers.
I was rather disappointed with my continued existence, but maybe this life would be shorter, even if I was to kill myself I’d just respawn in another world so what’s the point?
“Hey there,” a rough, masculine voice said, when I looked around I found a black cat with vibrant yellow eyes was sitting before me, its eyes half closed as if I was interrupting its nap. He spoke without moving his mouth which I understood as a sign that he was speaking to me telepathically.
My first thought was that the world had talking cat creatures, this would take some getting used to, “What-” I said the words but immediately covered my mouth as I heard the squeaky voice that came from my mouth.

What the hell was that?! I thought to myself, did the process of dying mess with my vocal cords? That makes no sense I didn’t even die screaming or anything!
“What happened, not very fond of the new body?” the cat asked, it was at this point that I realised that this cat was no ordinary field cat, it casually walked in a circle around me.
Through my hand still covering my mouth I asked, “W- what happened!?” the voice was so annoying that I tried to make it sound deeper even if it still sounded silly.
I tried to cough a few times, did I swallow a kazoo or something?

“You’ve died exactly one hundred times before the age of fifty, so I’ve been sent down to see how the fuck you’ve managed that.” the cat said in an exhausted tone, as if he was disappointed to have to explain this to someone.
I crossed my arms and my expression must have been a blank one, “a hundred deaths… alright…” I said out loud, up until now I had the idea in my mind, but now I had something I can call evidence that I had a hundred lives…
My thoughts weren’t joy over living anew, it wasn’t excitement for the new world, it was a deep, empty void…

“Relax, I’m here to make sure you don’t ruin your life again.” the cat said in a tone suggesting I should feel relieved,
“I’m good thanks” I replied blankly before looking around me for any clue as to where I should go next.
The cat pulled back at this point eyeing me.
“What do you mean?” The cat asked, his tone was almost irritated.
“I’m good, if I’m lucky I will find a place to rot for a bit longer?” I replied, I honestly just hoped there’d be an abandoned cabin or something for me to stay in.
The cat stayed quiet for a bit, it eyed me and I did my best to maintain the eye contact.
“Is that really what you’re going to do with your brand new life?!?” the cat demanded.
I nodded quietly.
“I can see why you’re in this situation…”the cat replied.
I just stood there waiting for the cat to stop lecturing me.
“Aren’t you going to say anything?!” The cat asked.
I put my thumb and index finger under my chin as if to signify that I’m thinking before saying “Can I leave now?”
The cat sighed a long drawn out sigh.
“Do you actually not care about what will happen to you in this world?” The cat asked, he sounded defeated.
“Not particularly…” I replied.
“I’m getting depressed talking to you… let’s wrap this up then.” The cat said.
I nodded.
“I’ll give you some info about yourself in this world.” The cat said.
“Reach into your right pocket.” he added.

As I reached down to find my pocket I realised it wasn’t there, I looked down only to find I was wearing something I at the time assumed was a long tunic, on its side I found what looked like a bag or pouch sewn into the side of it, I reached inside and pulled out a thin metal plate.
“Do all people in this world wear these kinds of clothes?” I asked not moving my gaze from the piece of metal I took out from my pocket.

The cat didn’t say anything for a moment, “I see what’s going on here.” the cat said, he was chuckling at this point. I had a feeling he was making fun of my ignorance of this new world.

I held the metal plate in my hand and looked at the engraved text. “Name, blank,” I turned to look at the cat, “Seriously, I don’t even get to name my character?” I asked, I was a little relieved that was all he was laughing about.
My concern returned twice as bad when he continued laughing as he told me to keep reading.
“Age eight… I guess that explains the voice… ” I replied, looking at my hands, this shouldn't be a problem, I never had much of an interest in alcohol or cigarettes.
The cat stayed silent as if he was waiting for a punchline.
“Sex female…” I exclaimed reading over the engraved text over and over again, hoping I misread something.
“What the hell did you do cat?” I demanded, my expression being the usual blank or maybe bored but my tone slightly irritated.
“I didn’t do anything, what’s the matter?” the cat asked rolling on the floor laughing.
“Is this some sort of revenge?” I asked.
“Did someone castrate you in your past life and now you seek revenge?” I added.
The cat seemed to take insult.