You are here: Products Back Issues (Burn Outs #1) by Dani Hermit & Curtis Star 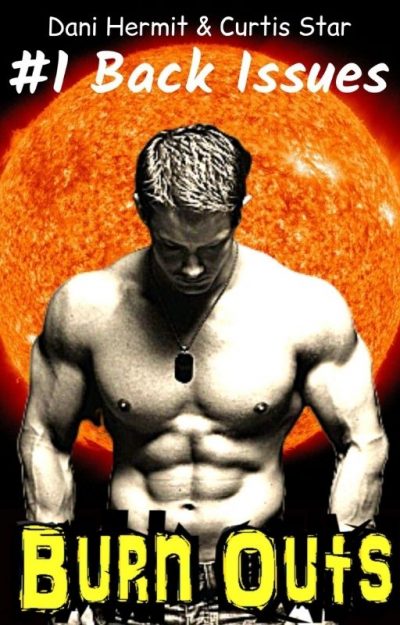 Several years past 50, Matt thought that his days as a Villain in the staged Chosen fights were long over.

But then his powers returned in the wake of a devastating attack that took the powers of all the active Chosen, perpetrated by a young Hero.

With no other choice, Matt goes to the one man who might understand what is happening to him – Colton. The man who was Matt’s main rival back in the days of his fighting career. A man Matt hasn’t seen since the day he burned out and walked away from the fights.

That would be complicated enough. But back then, they were also secret lovers. Matt walked away from that as well without a goodbye.

Now after nearly twenty five years, these two men are coming face to face for the first time. Can they handle their personal issues while trying to save the world from a Hero gone bad?

It has been a rocky road full of pitfalls and potholes that has lead to the current format of writing dark and kinky boy’s love and gay romance novels that are becoming the bedrock of the Hermit & Star brand.

We've been talking about doing a superhero story for a long time, but recently we got into the anime My Hero Academia and the Netflix series Umbrella Academy. That inspiration sparked the story that became the Burn Outs series.

It’s really late, Matt realized.
He had spent a long time after talking to Thomas standing on the bottom stair leading up to Boris’s apartment. The other two men had left to find food, promising to try and give Matt the time he needed to make things right with Colton. But now that he was on his own, Matt wasn’t sure that was something that could happen. What he had done was unforgivable. He had turned something sexy and sacred into a weapon. He had used what he knew about Colton to manipulate and hurt him. He shouldn’t go anywhere near Colton again.
But he had to. He really did. Colton was trapped inside of his own body, of that Matt was certain. The only person who might be able to circumvent Mythos and bring Colton back was him. Boris was a stranger and Thomas didn’t have it in him. Especially not after what happened in the underground chambers while he was under Blue Bolt’s control.
Matt knew that they were going to have to talk about that later. Not so much what Thomas did, but how in the hell had a lightning user controlled them like that? It made no sense in relation to his powers. Something was off, but Matt couldn’t put a finger on it yet.
He began to climb the stairs. He had no idea what was waiting for him. Was Mythos awake and on the warpath? Would he even still be here if he were awake? Could it be that Colton was back and waiting for him? Or had he destroyed any chance of reconciling their relationship with his actions?
There were too many questions and nowhere near enough answers.
Pausing again halfway up, Matt took several deep breaths. The night was quiet and cool. He wasn’t going to forget what he did, but he might be able to get past it for a while. That was all he needed.
An hour, maybe two of clear-thinking, confident Matt. Of remembering what he used to be to Colton. Remembering what he had not been since the day he burned out and walked away from everything. Though he loved the games they played of dominance and submission, Matt had never been interested in taking on the role of dom to anyone else. It was something special with Colton and he just couldn’t consider it even when he tried to move on and have other relationships. He feared he was tragically out of practice.
Forcing himself to let go of the not at all helpful thoughts, Matt finished walking up the stairs and with only a moment’s hesitation opened the door. Inside was even more quiet than outside. But the single light was still on, and he could clearly see that Colton was awake. He was sitting up and wrapped in the blanket. His back was against the wall where Matt had held him pinned not an hour ago.
Matt closed the door and made his way across the room, doing all he could not to look at the growing bruises around Colton’s neck in the shape of his hands.
“You awake, Pony?” He asked, stopping a few steps away, and crossing his arms. He did what he could to look like he thought he should. Slightly detached, but turned on. In control of everything, including Colton.
What he felt was ridiculous. This used to be so easy. Second nature. This was once the most natural thing in the world for the two of them, but now he was trying to put on a front because he’d been a fucking idiot. He’d run away and now here he was, acting like nothing had changed. He was a fucking moron and it wouldn’t be long before Colton figured that out too.
“Not talking to me?” Matt prompted. This would be easier if he could get a response out of Colton. If he knew whether he was talking to his former lover or the spirit of Mythos.
“Not exactly easy to talk at the moment.” The wrapped bundle gave no indication of what Matt was going to get other than someone waking up with a sore throat. But the person inside couldn’t really help him until he figured it out. He’d been choked out by Matt’s hand. Just one more thing in a world that didn’t make sense anymore. That maybe never would.
“Are you a nightmare?” Colton was fighting to get fully in his own body. He was there but so was Mythos, and while he was silent, Colton could tell Mythos was plotting. If Matt was his Matt, maybe he could find his way to the place where he was more than Mythos. But if Mythos took control, could he hurt Matt? Would they hurt each other? “You should just leave me.”
Matt sighed and squatted down to put himself on the same level as Colton. “I already tried that. It did nothing good for either of us.” He reached out to push the blanket back so he could touch Colton’s shoulder with the lightest stroke of his fingertips. “Want to try something else?”
Colton saw so much he couldn’t understand in Matt’s eyes. Pain? Love? Despair? The person he once was would know exactly how to respond but he wasn’t sure that person still existed. He looked away.
“I don’t know. I don’t think I’m the one you need.”
Matt took hold of Colton’s chin, firmly turning his head back. “Since when do you get to decide what I need?” He leaned in to kiss Colton, not sure what response he would get.
That voice, Matt’s voice, washed over Colton. It was as powerful as a summoning. Colton could feel his spirit returning. As he welcomed the kiss, Matt’s lips were rougher than he remembered, sun worn from years of hard work. His tongue was just as adept though. Mythos pushed against his brain, his soul, but he’d fight it as long as he could.