You are here: Products Awakening the Wolf, A Shadow-walkers werewolf romance by Kelley Heckart 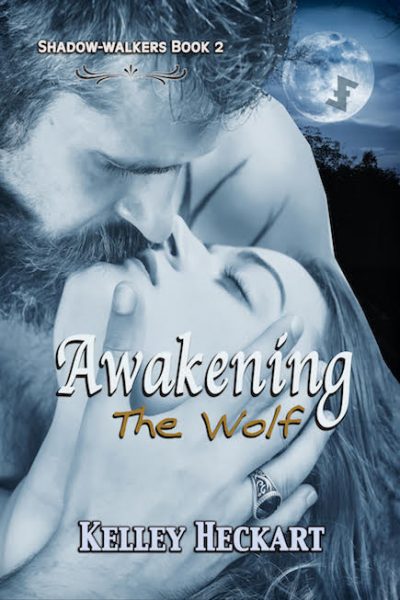 Awakening the Wolf, A Shadow-walkers werewolf romance by Kelley Heckart

(This is a standalone story.)

Do you like paranormal romances with hunky werewolves and a murder mystery? Rock Star meets Supernatural in this exciting new series. The women are the rock stars here, and they command the supernatural alpha males in their lives. Grab a copy now and enter the sexy, scary, and thrilling world of Shadow-walkers.

She doesn’t believe in love.

The controversial, promiscuous lead singer of the all-female hard rock band Hecate’s Fury, Cyn has vowed never to commit to one man. She’s also a Shadow-walker, whose Wolfsangel rune binds her to werewolves.

Even her unrestrained heart can be captured.

Two charming, handsome werewolves vie for her attentions. Both are suspects. As the clues lead to a shocking discovery connected to her past, Cyn realizes she is tied to these werewolves by more than her mystical rune. Even if she opens her heart to love, werewolves are monogamous. She is not.
*
Series blurb:
The five young women of Hecate’s Fury are more than rock stars.
They are Shadow-walkers, chosen to help the supernatural world.
There’s just one problem—no one trained them.

Multi-published author Kelley Heckart lives in Arizona with her musician husband, dog, and a number of backyard “pets.” Her stories reflect her passion for ancient and medieval time periods, storytelling and the supernatural. Inspired by the ancient Celts, her tales are filled with fierce warriors and alpha heroes, bold women, otherworldly creatures, magic, and romance. When not writing, she works as a freelance editor, practices target archery, and writes and records music with her husband. She can be found online at http://www.kelleyheckart.com/

I have always been a writer in some form, starting out with poetry and songs, then graduating to short stories and novels. My new Shadow-walkers series is inspired by my time as a rock and roll musician and playing in various bands, including two all-female bands. I added paranormal elements, so this series is Rock Star meets Supernatural. The twist is that the girls are the rock stars, and they command the supernatural males they love. There is also real music, written my myself and my musician husband, that goes along with this series. We used the fictional band name, Hecate's Fury, and can be found on ReverbNation.

Irritation heated my cheeks. “That’s it. I’m out of here.” I got up, stormed toward the door, and pulled the handle. After struggling and unable to get it open, I pounded on it with both fists. “Stupid damn door.”
So much for my graceful, dramatic exit.
He tugged me back against him. “Stop. You’re going to hurt yourself.”
Images of Eddie’s dead body filled my mind, and I heard Henry’s convincing accusation aimed at Lucius. Sudden rage ignited inside me, and I kicked and struggled to get away from the murderous werewolf, but it was no use. He was too strong, and, dear goddess, his hard body aroused me as he held me. How could I be attracted to him?
“You killed Eddie! He was my friend!” I blurted out. Enraged, I turned and pounded on his chest.
He stood still and took my hard blows without uttering a sound. Exhausted, I finished my outburst.
Lucius Quinn stared down at me, his dark eyes pained and glistening, his jaw clenched. “He was my friend, too,” he said in a rough voice.
I raised my eyebrows, and I lowered my arms at my sides. That was certainly not the reaction I expected from him. A faint tightness pressed into my chest at his sincerity.
Lucius moved toward the door, swung it open, and stepped aside. “For the record, the door opens outward. You are free to go. I will escort you as far as I can.”
Cold air blasted me from outside. Deep shadows filled the forest as the sun set.
“You didn’t kill Eddie?” I was touched by his unexpected show of emotion, and my words came out raspy through a tight throat.
“No.”
“Henry told me you were the chief suspect.”
He exhaled an exasperated breath. “Are you going to leave or not? Cold air is coming in.”
“Not.”
I had to find out more about this mysterious werewolf. He could have harmed me, but he hadn’t. And a part of me believed he didn’t kill Eddie, though I couldn’t rule him out as a suspect yet.
*

Be the first to review “Awakening the Wolf, A Shadow-walkers werewolf romance by Kelley Heckart” Cancel reply