You are here: Products Awakening (Sorceress of Desire, Part 1) by Aaron Abson 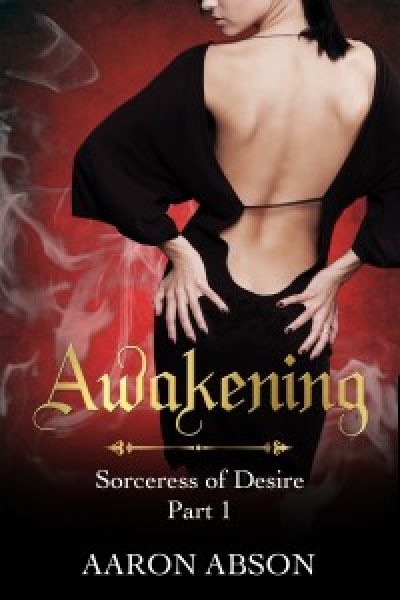 Sasha is finally ready to bond a spirit that will increase her powers and grant her the freedom she’s been seeking. As the only female student at the Imperial School of Magic, she’s endured years of discrimination and scorn. All of that is about to change when she meets Vi.

Vi is the embodiment of desire, and she chooses Sasha to share her bond. The bond comes with rare power, but also a price – Sasha must generate the arousal of others, or she dies. Vi can teach Sasha everything she needs to keep them satisfied, but Sasha must be willing to learn.

Sasha quickly discovers that Vi knows everything about her, and what turns her on. Vi wastes no time uncovering Sasha’s forbidden fantasies before showing her exactly how to go after the men – or women – she wants.

I’ve always been a huge fan of the fantasy genre in general. You know that moment when the hero gets the heroine? Sometimes it fades to black…sometimes there’s a bit of description…but mostly it leaves you imagining your own scene. I’m writing this series for those unfulfilled scenes I’ve always wanted to read. The plot will unravel slowly around our nymphomaniac characters, blending epic events with epic sex. Just what I’ve always wanted.

…I can sit. Silently, with no flash of light or display of smoke as Sasha’s overactive imagination expected, Vi appeared sitting in front of her, just as naked as Sasha. She was human, or at least appeared so. Her hair was long past her shoulders and blond, as opposed to Sasha’s brown, but they shared the same blue eyes. What was more apparent was that Vi was…gorgeous. She was cross-legged, sitting back comfortably on her hands, which caused her chest to draw Sasha’s gaze almost immediately. Her breasts were perfect. They were exactly the sort of breasts that Sasha wished she could have. Not huge, back-straining breasts, but definitely ample, and with perfect nipples. Everything about her posture screamed comfort with her body. If she was ashamed or concerned of her nakedness in any way, it didn’t show. Sasha sat up slightly, and unconsciously tried to emulate Vi’s feeling of ease by sitting in a similar manner.
I’m so glad you approve. Vi said, cupping her breasts with both hands and giving them a little squeeze. Her mouth moved to match the words, and the illusion of having a conversation was complete. The effect of hearing the words in her mind and seeing Vi “say” them were indistinguishable from a normal conversation. Her “voice” could still be described as sultry, but playful at the same time.
“Don’t worry, I’ve already started making your body just as sexy as this one. We’re going to need the men at attention, and the women wet through every means we can muster!” Vi smiled, placed one hand back behind her, and moved her other hand to between her legs and started to idly rub herself, as if to emphasize the “wet”. As soon as she started rubbing, Sasha felt her own body respond. It was if she had begun rubbing herself, the feeling was so real. She looked down, and could see nothing different between her legs, except…that all her hair was gone. Her abs were more defined, her body leaner, athletic but full. Her breasts were mirror images of Vi’s perfect pair. She forgot the feelings coming from her body and grabbed her breasts in disbelief.
“What have you done!? I didn’t…even feel anything!” Sasha ran out of words. She stopped to think. Her body was as amazing as Vi’s. It wasn’t terrible before, but her hips were slightly to big, her breasts smaller than she wanted, her butt could have, of course, been a bit more shapely…but now…she was beautiful. She knew the bond changed people. She had expected some change, but she was not prepared for such a complete makeover. She considered for a moment how rare it was that a bonded magician was ugly, but having never known one prior to their bond, she couldn’t be sure how radical the changes could be.
“Is my face the same!?” Sasha demanded, and brought her hands to her face, feeling it for differences.
“It’s mostly the same – your face has always been your best feature. I’ve been working on clearing off any unsightly blemishes, and shortening your nose ever so slightly. No one should really be able to tell the difference, except to notice your amazing skin. Don’t worry. They expect these sorts of things from the bond. For all the masters will know, you’ve bonded a spirit of beauty,” Vi said reassuringly. She hadn’t stopped rubbing herself, and as Sasha watched, she brought her fingers to her lips and slowly sucked on her middle finger, before bringing it back down, and, never breaking eye contact with Sasha, slipped it between the lips of her vagina. She was now rubbing and fingering herself slowly with a small smile of pleasure as she regarded Sasha.
Sasha felt a finger slip inside her own body. It felt as if a hand not her own were pleasing her. She gasped and felt between her legs but could feel no hand, despite the very apparent feeling of being penetrated in time to Vi’s finger. While there was no pain – in fact quite the opposite – no one had ever touched her in this way. Sasha had certainly touched herself before now – usually with Gail or Corin as the main players in the sexual fantasy world she often went to, and she had always craved for one of them to touch her like this, but this…this was surreal. She didn’t know if she should object. Was it part of the bonding process? A spirit comes down, pleasures their intended, and thanks off they go?
“What are you doing? How am I feeling this?” she thought, more surprised than alarmed.
…

Be the first to review “Awakening (Sorceress of Desire, Part 1) by Aaron Abson” Cancel reply