You are here: Products Atlanta’s Most Eligible Bachelor by Mia Mae Lynne 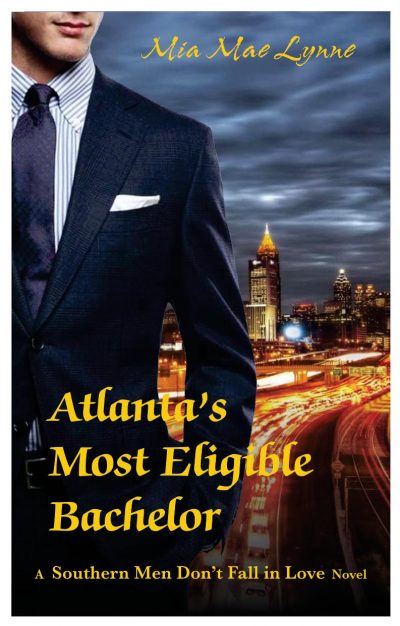 “Atlanta’s Most Eligible Bachelor” has it all. His career was on the rise at Whitman Stacks, LLC., a law firm located on the perimeter of Atlanta. His cell phone rang constantly of women who wanted to possess the man with deep blue eyes and sandy blonde hair. Women of all ages fell for his boyishly handsome good looks and his impeccable manners. He was elusive to any type of commitment. “Three date max” was his motto until crossing paths with Lisa Dunbar.

After a moderately successful career as a traveling professional soccer player, Lisa has finally come home to settle down and start her career as a newly licensed CPA in Atlanta. She is hired at Grant & Co. CPA’s by Mona Grant. Staunchly independent, Lisa takes life’s challenges as they come. She’s satisfied with her single status as an African American woman and has no time to look for love. Her chance meeting with a man that she only knows as a commitment phobic bachelor alters her plans for her future.

The meeting, explosive. The romance intense. This first book in the “Southern Men Don’t Fall In Love” series explores how fate can set the time and place for a romance to begin.

I started writing the Chronicles of Fate series in 2008. Life events happened and the books were put away until 2015 when the first release was published. The series was renamed to "Southern Men Don't Fall In Love" and the first book was titled "Atlanta's Most Eligible Bachelor". I have five releases in English and two releases in Spanish, "El Soltero Mas Codiciado de Atlanta." (European Spanish and Spanish of the America's)

My son Carlos translated the first book into Spanish and called two of his friends to edit the books. All three books released November 4, 2015 which is Carlos's birthday. I don't speak Spanish but both of my children do. I believe it is important to have a second language and stressed at an early age that they learn Spanish. I would love to promote my translated books in the Spanish romance genre.

I am self published through Book & Spirit, LLC. I release twice a year. The second release date is April 26th which is my youngest son Marcus' birthday. I may add additional dates in the future.

During the release of my first book, I met my current editor, Lex Hupertz. She designs my cover and edits my books. I could not stress enough the importance of an excellent editor and specifically one that understands your writing style as well as assists you with the development of your work. It makes a difference in a decent book to great reading.

This first book was inspired by the late Leslie Esdaile's book "The Sisterhood of Shopaholic's". It kicked off the story line in Atlanta's Most Eligible Bachelor. Her story was about a pilot who met a woman three times in the same day. I expanded the idea of not only meeting the same woman but in different places all over Atlanta. This was a really fun book to write. I continued with writing Atlanta's Most Eligible Bachelor II and III. Maybe up the road I'll do an anniversary edition or write the next generation.

Doug packed Friday morning and left for an early morning flight to Atlanta. Since he barely made his plane to Miami, he arrived at the airport early. He had business class seating so he boarded the plane early. He took out his paper and started to relax.

Lisa took a taxi to the airport and checked in at the ticket counter. There was a discrepancy with her seating causing supervisors to assist with her seating. Because of the inconvenience, she was offered business class seating and rushed to the plane before it took off. She was the last passenger to board the plane. Trying to catch her breath from running through the airport, she plopped down in her seat and turned to her right. This passenger has his head buried in the Wall Street Journal. She fastened her seat belt.

Doug noticed that someone has sat down next to him and he lowered his paper. They both let out a small shriek, and they were startled by each other.

“What are you doing on this plane?” Doug asked.

“Mona sent me home early and my tickets were incorrect so they offered me business class seating.”

“Well at least I know the person that I am sitting with on this flight.”

“Lisa, I don’t think this is going to end anytime soon. I have a proposition that I would like for you to think over. I know you will say no but think about it first.”

“What is it Doug?” Anything to keep this twist of fate from happening again.

Lisa stared at him in disbelief. There was no way she was moving in with Doug.

“This is nuts. I am not living with you. After this plane lands, we will not see each other again.” Lisa shook her head and said, “This is not normal.”

“Lisa, we have to stop these surprise encounters. I am all out of ideas. Can you come up with a better one?”

“Have you completely lost your mind? I am NOT sleeping with you.”