You are here: Products Assassin Marked by Michael C. Sahd 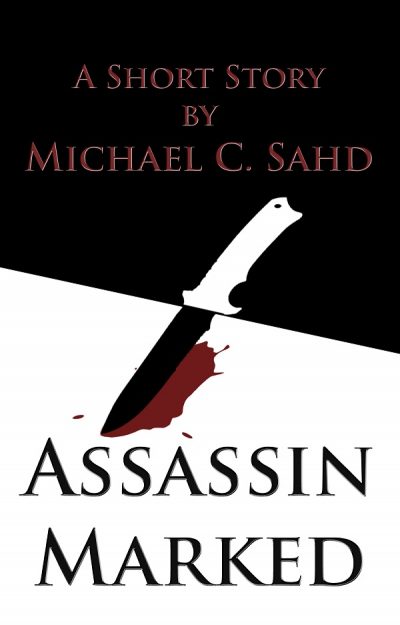 Although he knows it will mean the end of his relationship with both the Crime Syndicate and his long-time lover, Captain Victoria Maruska, Damian can’t let sleeping dogs lie. After overcoming his captain’s well-intended efforts to hold him back, Damian sets off to exact his revenge on the man who had once left him to die on the barren wastelands of Earth. . . .

Victoria may not know where to look, but she knows she has to find him. Following Damian’s disappearance and the not-so-mysterious murder of one of his superiors, the Syndicate has called Captain Maruska’s loyalty into question. As a result, she has been assigned the unenviable job of leading a task force to hunt him down. . . .

On the outs with his lover and on the run from trained killers, Damian DuFonte is . . .
an Assassin Marked.

Michael C. Sahd grew up in Santa Fe, New Mexico. From a young age, he read voraciously, particularly in the fields of fantasy and science fiction. Shortly after becoming a teenager, he learned to play and enjoy fantasy games such as Dungeons and Dragons. At around the same time, he began writing stories and D&D campaigns of his own.

As an adult, Michael attended New Mexico University, studying in the fields of English and literature. During this time, he honed his writing skills and expanded his writing portfolio. Although he has completed numerous short stories, "Assassin Marked" marks his debut published work.

Currently, Michael lives with his wife and four children in a small town in Texas.

I actually began writing this book as part of a college writing class assignment. Of course, it has evolved a good deal since then, but that was its roots. I would say it was inspired by the Firefly sci-fi television series as well as by the Cowboy Bebop anime series.

I sat alone in the cramped room. Flames licked the end of my cigarette, brightening the tip with each puff. The ageless Zippo snapped shut with a flick of my finger, then slipped smoothly back into my pocket. After taking a deep drag, I exhaled a plume of smoke that escaped into the ship's filtration vent.

Silence seeped into every corner of the room, magnifying the cigarette crackle. On the counter stood an oval upright mirror, surrounded by my favorite pistol, a knife from my military days, and various toiletries. I sat staring at the haggard man in the mirror. Years of battle and death reflected off that long, gaunt face. God, I’m tired . . . so fucking tired.

Click, the electric razor hum drowned the crackling of the cig. Trimming my beard to its usual five-o'clock shadow, I revealed the anger-scarred face below. Two years on that desolate planet. Two long years, because of that bastard. Struggling to stay alive, I had scrounged for food and toiled against the cold.

The Syndicate had sent me to Earth to handle some fanatics who still clung to old Earth superstitions. Mike had dropped me planet-side, waited for me to complete the job, then hightailed it.

Although our bad blood pre-dated the war, I had been willing to forget about the past. Apparently, he wasn’t so forgiving. Now, I wouldn't be so forgiving either. After four years of searching, I had finally found him, serving in the Crime Syndicate’s upper echelon.

The automatic door retracted into the wall, and she stepped through, the cacophony of the ship following close behind her. I didn’t have to look to know it was her. Her psychic power, full of anger and despair, emanated from her like a heavy gas.

I finished shaving and heard the click of her black heels approaching my refresher station. “Why the hell are you smoking in your cabin? You're stinking up my ship!” Her voice rose above the clamor outside my room and dashed through the hallway; then, the door slid shut, her last few words blasting in the confines of my room.

With great effort, as her psychic assault pin-cushioned my brain, I allowed a few seconds of silence while I inhaled the last drag of my cigarette. Flicking the remains into the toilet, I turned to face her. Her deep brown eyes glared down at me, her painted lips pressed together in anger, her flushed high cheeks matching her fiery red hair. She wore professional black slacks and a matching suit jacket – standard Syndicate attire.

This wasn’t about smoking. My stomach nose-dived into the floor, but I managed to turn my back on her and pick up my pistol. The clip slid out of the chamber, then locked back in. Satisfied, I holstered the pistol under my blue blazer, then sheathed my knife into my boot. In the face of my composure, her power retreated, one needle at a time.

“Damian, did you really think I would let you leave? If you go after him, he’ll kill you.” I scoffed, but she continued, “Even if he doesn’t, you’ll be marked.”

Heat crept into my face. “Don't get in my way." I stood up, towering over her. “You know what he did.” She tensed, knowing I could kill her without even drawing my gun. Her psychic power spread out in a wall, rocking me on my feet. Waves of energy tickled my mind, reminding me that she could stop an advance. A small drop of blood oozed from my nostril.

Backing up, I grabbed my table mirror and smashed it against the wall behind me. I stared at the broken shards in amazement. How does she do this to me? How does she make me lose control like this? Sitting back down on my stool, I pinched the blood from my nose, then cleaned my fingers on a towel. I needed to think, but she made it difficult. “How did you know?”

She stared at the glass-littered floor, rolling her eyes and sighing at more than just my tantrum. “Did you really think you could hide your plans? The Syndicate has kept an eye on you from the moment I rescued you.” She gave me one of her half smiles. “Besides, when you think I’m not around, you televise your thoughts. Even when you try to hide them, you always think of cherry blossoms. Do you think I’m stupid?”

Ignoring the question, I said through gritted teeth, “So the Syndicate knows my plans? You're such a puppet.” Another cigarette flamed to life in my mouth.

Scowling at my cig, she said, “Screw you! I didn’t tell them anything, but they’ll know it’s you.”

Studying her brown eyes lined with black mascara, I smirked. After all this time, how could she doubt me? I said, “They’ll never know. I never leave evidence-”

“And that’s why they will know. No one else could get to him.” She sighed, her tension visibly dropping from her posture. “Damian, can't you listen to reason?”

I stared at her a long while, listening to her quiet breathing. The rhythm calmed me, as it had for the past four years. I knew she was right – that I could finish my life with her.

Victoria Maruska – my rescuer, my lover! When I was lost on Earth in the snow and close to death, she had felt my mind fading as I lay huddled under a snow-covered shack. After they had finished loading the ship, and against her better judgment, she had ordered her crew to dig up the small building. Later, I discovered that my delusional memories had tipped her off to who I was, and that is the only reason she had bothered having me rescued at all.

Standing there now, her psychic power radiated an aura of serenity. I’d seen her use her power to rally her men. She promoted positive emotions often – whenever she had the chance. Even when we shared our nights, she delivered her excitement and her passion to me. Rarely did she use her power to intimidate or bully.

Her current abuse of her power highlighted her desperation. I stood up again, disposing of my cigarette, and embraced her. Sinking against me, she sighed; her hair smelled sweet. “I’m a fool. I should’ve known I couldn’t hide anything from you.”

Pushing away from me with a humorless smile, she said, “The Syndicate will protect him.” For a moment, I stared at her, searching her eyes for more, a little dumbfounded that she would think that I would care about that. When I saw her register that fact, I smirked. Her eyes hardening, she said, “They’ll protect him, and if you do kill him, then . . . then I’ll come after you.” Her tone left no doubt that she meant every word. The room swelled with her power, reminding me again that she didn’t need guns to kill.

Be the first to review “Assassin Marked by Michael C. Sahd” Cancel reply