You are here: Products Assassin In My Bed by Samantha Cade 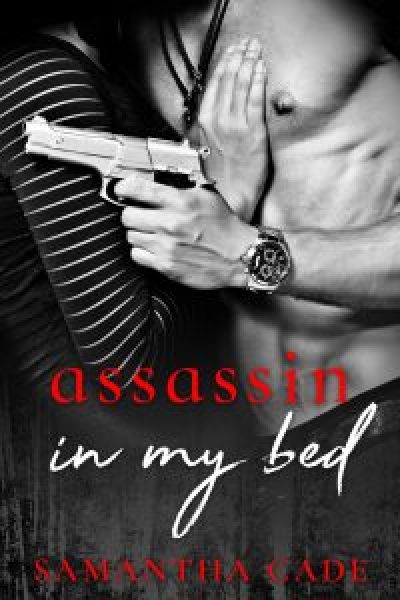 Assassin In My Bed by Samantha Cade

Samantha Cade dreams of bad boys, and if you read her books, you will too. She resides in rural North Carolina with two rowdy sons, and a real life alpha husband.

With every book I write, my main goal is to entertain the reader. As a reader myself, I look for stories that keep me compelled, guessing, and up all hours of the night turning pages. With Assassin In My Bed, I loaded the plot with twists and turns, surprises, and, of course, steamy romance. My hope is to give the reader an engaging, satisfying experience from beginning to end.

“I love to see you squirm with pleasure,” Zane says, his breath hot on Penny’s neck.
Penny feels all of her blood rush to one particular spot between her legs. With her stomach satisfied, another hunger makes itself known. Zane’s smile deepens, as if he can smell it on her. He grasps the back of her head, and pulls her closer to him.
“I want to taste that fire again,” he whispers harshly. “I want to bathe in it.”
Penny is overcome by euphoria. She feels herself being swept up into Zane’s arms. Her legs instinctively wrap around his waist for balance, and she hugs her arms tightly around his shoulders.
Zane cradles her against his chest. He caresses her back, thighs, and ass with slow intent, as if he’s memorizing her every curve. Zane’s delicious cooking and sexual magnetism have shattered Penny’s resistance. She tightens her thighs around him, grinding against his hard stomach. Zane’s eyes blaze as they lock on hers. He kisses her, his tongue thrusting into her mouth like he’s trying to invade her soul.
Zane forces himself to pull away. “Where’s your bedroom?” he asks, gruffly.
Penny knows she wouldn’t be able to tell Zane no, and she doesn’t want to. As soon as she points down the hallway, Zane is heading that way. Zane lays her back on the bed, then throws himself on top of her. The mattress beneath Penny dents sharply, and the bed frame groans under the weight of him. Zane kisses along her collarbone, down her chest, and over the tops of her breasts. He yanks her dress down, and clamps his lips over one of her nipples.
Penny’s back arches sharply as he suckles her tit. Before meeting Zane, sexual desire was an inconvenience, a distraction. Now, it consumes her. While Zane’s hand advances up her thighs, Penny’s rational brain finally becomes louder than her lizard brain. Yes, sleeping with him would be amazing, but then what? This possessive man will really think she belongs to him. Penny still hasn’t decided what she’s going to do about Zane. She feels like she’s playing with fire.
“Wait,” Penny says, breathlessly.
Zane stops immediately, then gives her a questioning look.
“I’m sorry,” Penny whispers. “I’m just not ready. Not yet.”
Zane’s face softens. He takes her hand and kisses it. “You don’t have to be sorry. It’s okay. I want you to be ready.” He places his mouth against her ear. “Because when I do take you, you’ll never be the same again.”
Penny has to fight with every once of willpower to not say, “Never mind. Let’s get back to it.”
But Zane is already climbing off of her. He goes into the bathroom, and returns a few minutes later. He lies down next to Penny, spooning her from behind. His body is so warm, she immediately thinks of sleep. Zane hooks his arm around her waist, and kisses the back of her neck. He settles onto the pillow, becoming still.
He means to sleep here, with me, Penny thinks.
As Zane’s breathing slows, Penny knows that it doesn’t matter whether she slept with Zane or not. He already thinks she belongs to him. It’s too late.
The weight of Zane’s arm against her body is a comfort. She knows that with this strong man wrapped around her, nothing will happen to her. For once, she feels secure. She sleeps more peacefully than she has in weeks with the assassin in her bed.