You are here: Products Arrested by Passion – The Complete Collection by JD Carabella 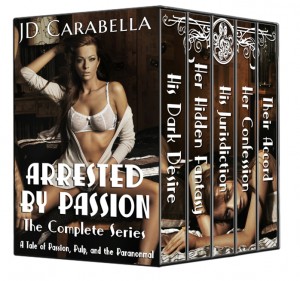 Arrested by Passion – The Complete Collection by JD Carabella

This is the Complete collected Arrested by Passion Series with never before released content!

To most of Kathleen’s readers she’s just a pulp fiction writer who spins tales about monsters and magic. On the brink of World War II, monstrous beasts and worse lurk in the shadows, unknown and unseen. Her universe is one of Lovecraftian horror and conservative morals. She’s not afraid of anything, except telling her boyfriend the truth about her feelings and her past.

However, she’s not the only one with secrets. Beneath the gentlemanly exterior of her detective boyfriend, Stephen, lurks an intensity she never suspected.

He’s waited long enough, it’s time for him to reveal his long suppressed desire to control and dominate the woman he loves.

How is a newly liberated woman supposed to agree to obey her lover’s orders? Can she still be an independent woman and a submissive?

A shadow from her past looms over her future; a deadly shadow that threatens to kill everyone she loves.

Kathleen’s life is about to take a turn for the passionate … if she survives.

Self-publishing and independent writing is a blessing, a way to get stories and ideas out that may not be the risk to the big publishing names. I would say to everyone who has a writer lurking in their heart – Write! I’m so glad that I finally did!

I love history – and especially the era from WWI to WWII, it is such a fascinating snapshot of our culture. Many of the things we’d associate with many dystopian societies now were real then. Women had the right to vote, but no rights in the home, no right to birth control, no right on the job. Minorities had almost no rights at all. Yet, it’s a time of beauty, art, fashion, romance and some of the bravest and most horrible things the human race has ever done. Add into that a ‘what would it have been like if …” There was a great fascination with the supernatural as well, with lots of rumors of what the Germans were doing in that area. What if … it was true?

With his lover firmly pinned against the table, the arm holding her close slithered down under the edge of the table where it caressed her backside through the weave of her skirt. Kathleen felt her breath speed up. This aggressiveness was not like Stephen, she thought. He was normally such a gentleman, but she had to admit that she found it exciting, feeling so helpless in his arms.
His kisses traveled up the opposite side of her neck, lolling her head to the side with the hand firmly tangled in her hair. His breathing sped up and became slightly ragged as he gently pawed the skirt up her thighs to the bottom of her backside, gathering the fabric with a few fingers, while the remaining digits rasped over the skin above her stockings. Kathleen felt her body shiver at the touch of his skin against the bare flesh of her legs. He slipped his hand under her skirt to firmly cup her full rear. Lifting her, his muscles bunched under his shirt, he sat her on the table with her skirt riding up her thighs, allowing him to push his way between her legs. She reminded herself that this was nothing they haven’t done before, it was just more impassioned. In some ways, Stephen’s restraint during love making was her only complaint. But compared to his kindness, dedication and steady job, it was nothing to complain about. Any girl would be lucky to catch a man like him.
He took a moment to look down at her, no idea of the thoughts that whirled in her head. One finger hooked under the strap of her garter and slid up its length to vanish under the rumpled fabric of her skirt. He smiled and looked up at her face. “Stop me if I am being too forward.”