You are here: Products Ariel: The First Guardian by Sydney Scrogham 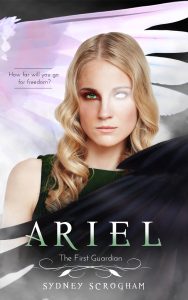 SYDNEY SCROGHAM loves creating happy endings. She started writing when she was 12. Her first book, Chase, was published by Koehler Books in August 2015. When she’s not writing, she’s at the barn with Snowdy or catching up on reruns of the best TV show ever – Castle. She lives in Harrisonburg, Virginia with an adorable dachshund named Zoe. To learn more, visit her website at sswriter.com.

PROLOGUE AND FIRST CHAPTER
THE BEGINNING OF THE END
I never wake up and think today’s the day I’m going to get dumped.
February wind chills my shoulders, and I tug the pink and blue patterned quilt snug around me and keep walking. The quilt is soft under my fingertips, smoothed from years of rubbing in my mother’s absence. One of the pink polka dot squares is frayed and flapping free. I could wear a coat, but it’s a jab against my father to sneak out in just a quilt. He thinks he can control me, but he can’t. He especially can’t control who I’m going to meet. Ryan, a.k.a. saintly pastor’s kid, is the first human being to make me feel like I’m made of more than slime.
The trail under my feet is brown and well-worn from countless walks to the river. Yellowed grass struggles to survive on either side of my path. My knee-length floral print dress ripples around my legs and my exposed skin prickles where the wind bites. I hate flowery anything. Just seeing my reflection in clothes so feminine puts cinderblocks in my lungs. But this was mom’s hand-me-down. I wish she could’ve met Ryan. He’s reserved his whole day for me today. I can’t stop the stupid smile that smooths over my mouth. Maybe I’ll get kissed for the first time—but do I really want that?
Two trees stand guard by a picnic table on the riverbank. The water’s surface is smooth and reflects the gray clouds overhead. Ryan’s perched on the top of the picnic table and he props his feet up on the bench. He has on his black trousers and a pressed white shirt, and I’m warmed by the thought he wore his best for me. But something about his posture plucks a nerve in my abdomen. His shoulders hunch over his knees and his head is down. The black brim of his hat hides his eyes as he faces the river.
I should go back. Now.
No. That’s my inner victim voice speaking. She always thinks I’m in trouble, but I’m teaching her that Ryan won’t hurt me. I hop onto the picnic table behind Ryan, swing my legs over, and hug him from behind. A cool breeze from the river surface steals the warmth of his musk from my nose. Instead, I inhale a moist, earthy smell.
I whisper in his ear. “Hey.” The soft sound of my voice is leveled perfectly with the world around me, waiting, like we’re all about to witness some epic show.
Ryan leans away and twists to face me. “There’s something I need to tell you.”
I’ve got a joke ready, but the deep tone in his voice makes me swallow it. His blue eyes are devoid of jest. When he rubs his neck, his gaze hovers at his knees, but all I can focus on is the darkened wood grain of the picnic table.
“I haven’t been completely honest with you about my previous relationship,” Ryan says.
In my mind, I leap up and leave, but in reality I’m frozen to my spot on the picnic table. Not even the quilt can shelter me from this chill.
Ryan keeps going. “God told me I needed to tell you I’m not over Kat.”
My eyes slide shut. Maybe now that I’m in darkness all of this will go away. Poof. You’re gone. Your ex is gone. It’s just us. But when I open my eyes again, Ryan’s eyes haven’t changed. His words haven’t sunk into me, either. Something’s mixed up. I’m not a pro, but I’m pretty sure you don’t make a candlelight dinner for your girlfriend (like he did for me last night) while you’re still in love with someone else.
I relax my jaw enough to speak. “What are you saying?” A dead leaf, one that clung to the tree beside me for this long through winter, launches free into the air, unable to hold on any longer. The wind carries it to the ground and skips it away.
Ryan’s blue eyes, gray in the wintery light, look out at the river. He whispers, “She’s the one. Hers is the face I want to see every morning when I wake up.”
My lips part in shock. Now my brain catches up. My stomach flops out and smacks the ground under the picnic table. Not literally—yet. I tear my gaze away from him. Here I was, dreaming like an idiot about a first kiss. My face burns with a mix of embarrassment and anger.
Ryan turns toward me. “I’m sorry, Ariel. I should’ve told you sooner.”
I wish I could say I got up and left then. But I didn’t. I waited while my heart ripped to shreds in Ryan’s silence, and the memory of his eyes burned solid into my brain.
In retrospect, I had no idea I’d never see him again in this world. I had no idea I’d have recurring dreams that we were still together. I had no idea this emotional shock would wreck my hope for something better and push me toward murdering my father. As soon as I hit prison, I should’ve told myself to give up. End it.
But I didn’t. I said yes when someone offered me a way out as a service worker in a wildlife protection program. At least, that’s what the genetic engineering company called it. Little did I know that Ryan would volunteer for the same program.
Now, I’m in Agalrae. I could admit to you that I still love Ryan. But does he still love me?

Be the first to review “Ariel: The First Guardian by Sydney Scrogham” Cancel reply