You are here: Products Arakzeon City by T.M. Caruana 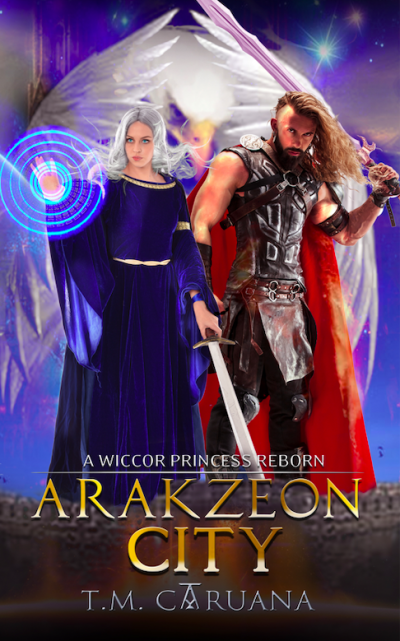 Arakzeon City, a peaceful society where the Navitians and the Emphulettes live in harmony, after having made the Wiccors extinct, takes an ugly turn for the worse.
Marcus is the son of Mayor Gustus Gravelleli, a man who has dedicated his life to politics and has this year decided to run for President. Having criticised controversial views on the two remaining races’ ability to coexist, Marcus remains but only a shadow in supporting his father’s career, especially as his childhood crush, Megan, is Navitian.
Being an Emphulette means that Marcus can feel living creatures’ emotions and already knows that his tremendous love for Megan is reciprocated. Being a Navitian and hence able to determine the purity of any soul, Marcus fears that Megan can see evil inside him. Despite the mutual love, she has kept her distance.
What he doesn’t know is that she carries a secret, a fatal secret that would not be safe in Marcus’s hands. A secret that could keep them apart forever.

Living in Gibraltar, having earned an MBA and being a member of the ACCA, T. M. Caruana is an author who likes doing too much rather than too little. Apart from consuming too much coffee and chocolates she also enjoys writing complex stories with a vivid imagination, manifesting in new worlds and versatile characters. Having always been a free spirit at heart, her dream had always been to write fantasy novels in which to escape to. Your life is your dream -if you can dream it, you can live it-.

“Where are we going?”

“I’ll take you to Megan’s family.”

“They have always regarded you as a part of the family, haven’t they? They don’t have any reason to kill you.”

“Well,” I started saying, but wasn’t sure what was wise to declare.

“Well, lately I have given them a few reasons.”

“Marcus? What have you done?”

“Taking their daughter to the dungeons of the city where my father will experiment on her until he successfully kills her, isn’t that enough?”

“Probably, but I sense there’s more.”

“So, you can sense emotions as a Wiccor now?”

“Well, I might have also, just a little bit…”

“That’s pretty much what I said when I found out.”

“Not until she told me afterwards.”

“Okay, I suppose that’s better. Slightly better. It’s still bad. Very bad,” Pivirio stammered, holding one hand at his waist and the other waving in the air as he deliberated. “You have claimed the soul of the oldest generation’s Wiccor Princess. The woman everyone has had great hopes for…for centuries. The prophecy of the Princess that’ll make the strongest bond to unite the largest clans in the world’s history.”

“Well, if you put it like that, it definitely sounds worse.” I slumped down on an outcrop feeling utterly hopeless. “So, you see why we can’t just wander into their society, expecting understanding and help.”

Pivirio paced up and down obviously trying to work out a solution.

I clasped my hands, resting my forearms on my lap. “Are you angry with me?”

“The man from whom you have stolen a bride…and you killed his sister.”

There was silence as I watched Pivirio trying to come up with a plan or an idea, as he always used to when we played together as kids.

“Damn it, Marcus,” he swore again, clearly running short on solutions. “Where will I take you then?” he asked, waving with his arms in despair.

“You need to take me back to Megan. I’ll deal with the consequences. I’m sure my father won’t have me killed and there’s no place I’d rather be than with Megan.”

“You’re my best friend, Marcus, but Megan is my Princess. As long as you’re my hostage, they won’t touch Megan. A son for a daughter. If they kill Megan, we’ll kill you.”

“Thanks!” I spat at my life’s trifling worth in the eyes of my best friend.

“We wouldn’t really kill you, well at least not me personally, but the Emphulettes might think we will. They won’t harm her as long as they know you’re alive and our hostage. If you go back. They will kill Megan.”

“No! God no. They would kill you. And the Navitians would too,” he said with concern, but then smiled. “How good are you at surviving in the wild?”

“Does someone serve food on silver plates?”

Be the first to review “Arakzeon City by T.M. Caruana” Cancel reply