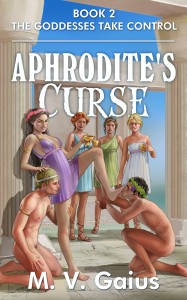 Poor Demetrius, still on his quest to overturn Aphrodite’s Curse, things aren’t getting any easier for him in book 2. Still forced to be permanently naked and perpetually chaste, he is highly motivated to overcome any obstacle to finally obtain sweet relief for his aching overripe plums. Encountering Ishtar, the Babylonian Goddess of Love, his troubles only increase as each interaction with a new God brings mixed results.

Demetrius is not the only male in trouble on Olympus as the beautiful Graces, the alluring Muses and all of the other sexy and delicious Goddesses finally put their lovely feet down and exert their own divine will over their wayward men. The God’s may rule Olympus, but the Goddesses rule the GODS!

I specialize in fiction relating to Female Domination, CFNM, Tease and Denial and various foot fetish themes, and I like like my erotica to have a plot as well as the hot stuff. My stories tend to be as heavy on plot as they are on the hotter scenes, as sometimes the setup is just as arousing as the payoff.

His arms and legs outstretched to its maximum extension, Demetrius hung paralyzed against the cold marble walls of the labryinth, his mouth locked open in a silent scream. Ripped out of the warm wet velvety pussy of the glorious Carya right at the moment of his long denied orgasm, his whole body was as tense as steel as he hovered at the brink of release. His cock, erect and throbbing, bulged and pulsated in front of his suffering body while a single drop of pre-cum beaded on his slit. Golden and glowing, his cum dew lit the room as he helplessly thrust into the empty air. A single stroke would have released him fully and he moaned pitifully as he desperately tried to get any friction onto his dick to finish him off. It was sadly not meant to be.