You are here: Products Apart from Love by Uvi Poznansky 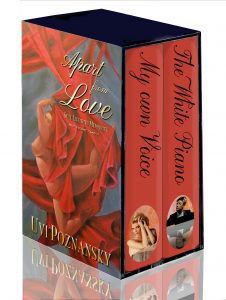 Apart from Love by Uvi Poznansky

Apart from Love is not your typical love story. All-consuming, heart-wrenching, and dark, it is a family saga that starts when Ben returns to meet his father, Lenny, and his new wife, Anita. It is then that he discovers a family secret. How will they find a path out of conflicts, out of isolation, from guilt to forgiveness?

My Own Voice (“As told by Anita”):
Ten years ago, Anita started an affair with Lenny, in spite of knowing that he was married and that his wife was succumbing to a mysterious disease. Now married to him and carrying his child, how can she compete with Natasha’s shadow and with her brilliance in the past? Given Anita’s lack of education, how can she resist his compelling wish to transform her? Can she survive his kind of love?

Faced with the way he writes her as a character in his book, how can Anita find a voice of her own? And when his estranged son, Ben, comes back and lives in the same small apartment, can she keep the balance between the two men, whose desire for her is marred by guilt and blame?

The White Piano (“As told by Ben”):
Coming back to his childhood home after years of absence, Ben is unprepared for the secret, which is now revealed to him: his mother, Natasha, who used to be a brilliant pianist, is losing herself to early-onset Alzheimer’s, which turns the way her mind works into a riddle. His father has remarried, and his new wife, Anita, looks remarkably similar to Natasha—only much younger. In this state of being isolated, being apart from love, how will Ben react to these marital affairs, when it is so tempting to resort to blame and guilt? “In our family, forgiveness is something you pray for, something you yearn to receive—but so seldom do you give it to others.”

Behind his father’s back, Ben and Anita find themselves increasingly drawn to each other. They take turns using an old tape recorder to express their most intimate thoughts, not realizing at first that their voices are being captured by him. These tapes, with his eloquent speech and her slang, reveal the story from two opposite viewpoints.

Dealing with the challenging prospects of the marriage of opposites, this book can be read as a standalone novel as well as part of one of family sagas best sellers. Still Life with Memories is a family saga series tinged with family saga romance, fraught with marital issues, and riddled with the difficulty of connecting fathers and sons.

Uvi writes across a variety of genres: My Own Voice, The White Piano, and Apart From Love (literary fiction), The Music of Us and Dancing with Air (romance), The David Chronicles, Rise to Power, A Peek at Bathsheba, and The Edge of Revolt ((historical fiction), A Favorite Son (biblical fiction), Home (poetry), Twisted (horror) Now I Am Paper and Jess and Wiggle (children’s book.)

I modeled the heroine, Anita, as the-opposite-of-me. She was to become a bold and spontaneous spirit, anything but repressed; a ‘distant sister’ to Eliza Doolittle, stuck somewhere in the middle of the play, a place where she has already acquired a lot of new vocabulary, but has not managed yet to shake off her grammar mistakes. Anita, at this point, is a work-in-progress. And, she tends to use the simplest, shortest words she can find, because they are the most direct. I totally share this with her! Other writers search for the most literary words, thinking it would make them sound highly intelligent, but in fact it distances them from the heart and guts of the reader.