You are here: Products Anything for an A by Stacey Carroll 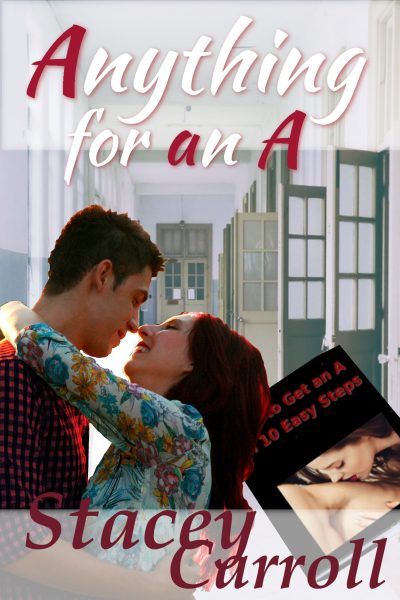 Anything for an A by Stacey Carroll

With time running out, 18-year-old senior, Kelsey, must get straight A’s to qualify for a scholarship to college. After living several years on the street with her poverty riddled parents, in by a man she calls Uncle Greg, but he only agreed to house her until she graduated from high school. With four weeks left, Kelsey has to prove that she has a 4.0 graduating GPA to get a free ride to college via an exclusive scholarship, and that means getting straight A’s her final semester and somehow convincing the teachers to change her previous grades. If she can’t do it, she knows she’ll end up back on the street.

In a high school that’s better known for it’s scandals and internal investigations than for it’s high academic achievement, high school senior, Kelsey Smith, has her work cut out for her if she plans to take home the A-Plus Scholarship so she can get a free ride to college.

Disadvantaged due to her upbringing on the street and missing years of primary schooling, Kelsey just doesn’t know enough of the material to get straight A’s, but she does know how to manipulate her friends into doing her homework, and she likes to think she’d good at giving the men what they want. Can she turn her orgasmic skills into straight A’s? She only has four weeks to make it happen! Otherwise, she could find herself back out on the street!

Stacey Carroll is the author of the new fiction thriller series – Avia, featuring drug running, heroin addicted, pilot, Avia Conn. Stacey Carroll grew up in Indianapolis, Indiana under harsh conditions. For a family of five, there was one mold-riddled bathroom. To get to school, we rode in an old beater Camero that leaked exhaust fumes into the passenger cabin and dripped gasoline from the engine. Whoever sat in the passenger's front seat had to hold the door closed because the latch was broken. Our meals consisted of whatever was served for lunch and the after-school snack.

The only respite from these harsh conditions was reading, and Stacey Carroll loved reading.
At least once a week, everyone was taken to the library to check out a stack of books, and we could checkout as many as we wanted as long as we kept track of them and ensured they were returned on time. This resulted in Stacey reading hundreds of books throughout her childhood and into her teen years.

Kelsey Smith stepped out of Carl’s car in front of 201 Church Street. As usual, Greg forgot to pick her up from school, and it was almost four in the afternoon. If Carl hadn’t stayed late to talk to the English teacher, Mr. Ingles, Kelsey would have been forced to walk home. While it was only about a mile, it was a mile farther than she wanted to walk after running up and down stairs all day.

Kelsey walked up the sidewalk and opened the faded black screen door. The brown-painted security door's handle didn't budge when she attempted to turn it.

After pulling out her key, she unlocked the handle and the deadbolt before testing it again. The lock had a habit of retracting the bolt ninety-nine percent of the way, leaving just enough bolt lip to make opening the door impossible without relocking it and unlocking it again. Today, it was working correctly.

Once the door was open, she waved to Carl to let him know she was fine and going inside. However, she paused with the screen door closed and watched until Carl's car completely disappeared from view. He had asked if she wanted company until Greg arrived home. She had not, but Carl insisted that he stay since this was a less than stellar neighborhood.

Kelsey politely refused his offer, reminding him that she grew up homeless on the street and needed no additional protection. Now, she wanted to make sure he had taken her refusal seriously. It looked like he had.

Kelsey closed and dead-bolted the door before turning and looking over at the couch. Greg wasn't on the couch, and after listening for a moment, she realized the house was completely silent. Greg was not home, and Kelsey made a mental note to kick his ass.

This was weird. He was usually home by three. Greg just never bothered to stop by Grand Central high school on his way home to pick her up. It irked Kelsey. She’d lived with him for the last five years.

He’d picked her up off the street during the summer between her seventh and eighth-grade years, or at least, they would have been had she been attending school. He’d found her sitting in front of a 7-11 on a 100-degree day. He stopped and asked her what she was doing sitting outside. Kelsey told him she was sitting, hoping someone would drop some change so she could get an ice cream cone or something to drink.

He walked into the 7-11 and bought her ice cream and a Coke. Each day, he struck up a bit more of a conversation. The man was an investor. When she saw him, he was on his lunch break. He lived alone in a three-bedroom, two-bath, two-story house. Kelsey congratulated him on his success. He asked her what she wanted to do with her life. Kelsey’s answer was short – survive it. That was when Greg offered to let her stay at his house, if she promised to re-enroll in school.

Now, she was in her final semester at Grand Central, and she needed straight A’s in order to qualify for a scholarship that would give her free room, board and tuition at any college in the state. If she didn’t, she’d find herself right back on the street eating shelter food and sleeping under cardboard boxes.

Kelsey knew Greg wouldn’t tolerate a loiterer or a freeloader in his house. He barely gave her any money as it was. Kelsey was certain he expected her to get a real job as soon as she was old enough. Preferably at the gas station down the street so she could walk there.

Kelsey tried it when she was 16 and failed. The shift was so late that Kelsey kept falling asleep in class. She had enough trouble maintaining passing grades without falling asleep. She quit after a week and doubted Greg had even noticed she’d tried to work. She did collect the check and cashed it, but it wasn’t enough money to do anything with. She ended up buying lunches with it for a month. While she bought lunches and slowly ran out of money, she contemplated ways to make money that didn’t involve exhausting herself at a shift job.

That was when she decided to offer services to the hornier of the boys at Grand Central, which was mostly the football team. Although, there were a few better-looking nerds that she did fuck for money on occasion. Her plan worked most of the time. She charged $40 per fuck. On a good week, she could make $200. The end of last week and today were hell. No one had wanted her since Thursday.