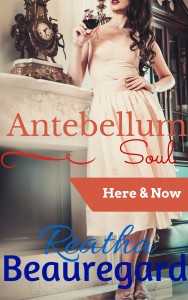 Randi Browne is quite literally on a quest to find herself when she arrives in Lafayette. She’s also on the run from the cops for impersonating someone else, but the law is the least of her worries. There’s something on the hunt for her, something dark and sinister that won’t stop until she’s dead. Can someone from her forgotten past be the key to her survival?

The only reason Isaac Bertrand lets the runaway, Randi, move in with him is because he owes somebody a favor. But with things heating up between Isaac’s band of vampires and a werewolf biker gang, distractions like the sexy houseguest could prove deadly. Randi reminds Isaac of the antebellum adventuress who broke his frostbitten heart. Can he trust the past not to repeat itself?

Step into a world where history never dies and the thrills last forever. This book is packed with mystery, sex and magic, and you won’t want to put it down! Add this paranormal romance masterpiece to your collection today.

I wondered what it would be like to wake up in with no memory of who I was. What sort of life would I create for myself? Would I take on someone else’s vision of who I should be? Once I pictured the heroine, Myranda Avant, it seemed only natural that the man for her would be someone like the refined vampire, Isaac Bertrand. The rest of the characters sprang to life as their story unfolded, and it’s been a wonderful journey with them! I can’t wait to see who else from this Antebellum Soul world I’ll write about next!