You are here: Products Annie Awakened, Volume 2: A Hotwife Adventure by Bart Tracer 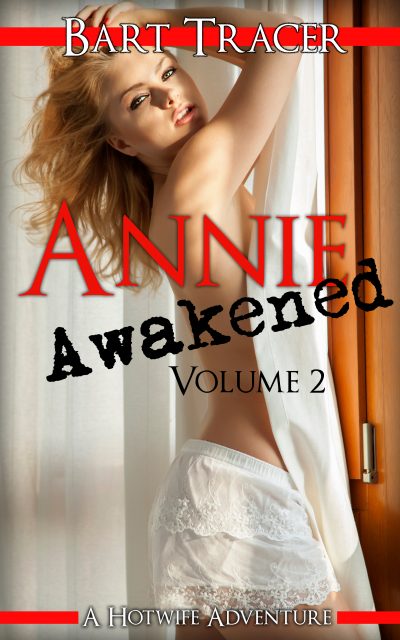 The path of self-discovery is never a straight line…

When Jim’s wife allows her boss to seduce her on their most recent business trip, Jim isn’t surprised, and he certainly isn’t angry. After all, he has been encouraging her to be more adventurous for some time now. As he listens to all the juicy details of her encounter, he finds himself wishing more than anything that he could have been there to see it. In fact, the more he thinks about it, the more he finds himself warming to the idea of watching his wife’s dalliances firsthand.

Now that Annie has actually tasted that first delicious bite of forbidden fruit, she realizes that she isn’t quite the woman she thought she was. Beneath her carefully maintained façade of domestic normalcy, there lurks a voracious, carnal beast just waiting to break free and run amok. As her office romance progresses, she begins to recognize an uncomfortable fact about herself: she secretly longs to be dominated by a strong and virile man like her boss.

As the wayward couple travels deeper into the world of wife sharing, will they be able to chart a course that satisfies both of them? Can Jim come to grips with Annie’s emerging submissive side? And will Annie be comfortable with her husband’s budding voyeurism?

I’m just your average, run-of-the-mill family man with an overactive imagination and a secret passion for writing naughty stories. A lot of these tales deal with wives or girlfriends exploring taboo fantasies with the support of their "significant others". I write the kinds of stories that I enjoy reading and try to create a narrative that pulls the reader in and establishes a real interest in the characters as people, with plenty of steamy action to keep things lively.

Be the first to review “Annie Awakened, Volume 2: A Hotwife Adventure by Bart Tracer” Cancel reply