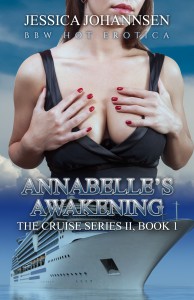 Jessica Johannsen is back with her Cruise Series II ready to take you on another journey of pure carnal pleasure and sensual adventures. This first book of the second series opens you up to a gentle and carefree ride of unlimited possibilities in everyone’s dream vacation. Contains loud, visual and explorative depiction of steamy actions. Her narrative tastefully undresses every word or phrase and ushers you to the most pleasurable experience ever!

She heard the sound of his hand move through the air behind her, heard the slap on her bottom before she felt the heat from the solid thud on her skin. Another slap landed on her other cheek. Annabelle sighed and pushed her ass up for more.

Reuben continued. The slaps started with a sting, and she felt her skin get hotter and hotter with each new press of his hand to her bottom. Her inner thighs squeezed and released. Her arms were shaking now. Heat and want and pain and need all mixed at a pace that her heart couldn’t keep up with. The next strike landed and she cried out.

She realized that while she was waiting around for him, she could give the rest of the world a little more romance, as well as chocolate and a few dirty thoughts, by sharing her stories. The Cruise series is the first of many more to come. Jessica recommends curling up with a good book and a bag of treats until you find yourself under the covers with your next sexy prince. When not reading, writing or snacking, Jessica can be found on the Gold Coast neighborhood of Chicago, salivating over impractical shoes or having a cocktail with an impossible cute frog.