You are here: Products ANIMAL INSTINCTS by Patricia Rosemoor 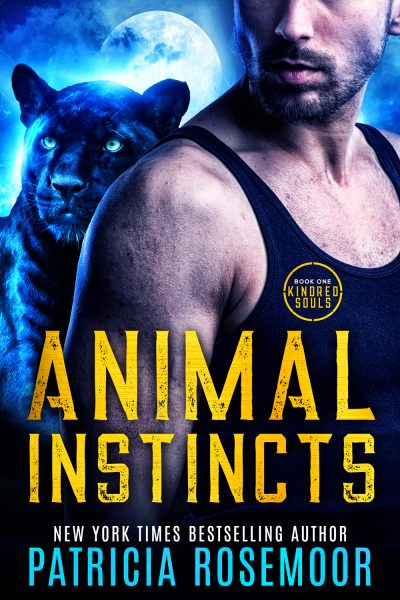 Half-human, half-Kindred, Luc Lazare doesn’t want more complications in his life. He’s focused on protecting his shapeshifting family and love is the last distraction he needs.

Skye Cross has the ability to talk to animals. Her most recent animal rescue mission–stopping an alleged dog fight–actually involved shifters in a primal battle. Her investigation leads her to Luc, a man whose powers both unsettle and intrigue her. Skye quickly finds herself caught in a dangerous world she never knew existed, while relying on a man she couldn’t possibly trust.

Coming from two different worlds, can Luc and Skye overcome the obstacles fated to keep them apart?

The last person on earth Nuala Lazare expected to see enter the lower deck of The Ark
was a man tall and broad enough to fill a doorway. With a shock of light brown hair
spiked around a determined expression, Detective Ethan Grainger flashed his star for
the security guard at the entry, and anger fluttered through her that he wasn’t Shade.
The guard let him in without hesitation. Ethan had no invitation as was required of
human gamblers, but he’d been exposed to the cloaked level on the hunt for Shade’s
killer, so he was known to security just as he knew the secret casino deck existed.
But what the hell did he want this time?
One of the wolf shifters in the animal habitat howled as if in complaint.
She would like to howl, too.
Howl… cry… scream. She had done all when she’d realized the finality of her loss
after Shade had left this earth for good.
Now she kept exquisite control as expected of her by her family and their
employees. She was awaiting the arrival of a whale, a gambler of great import in the
city, a lawyer who was also an alderman. With an interest in someday running the city
himself from behind the scenes, her father had instructed her to charm the man. That
was her job as executive hostess—charming men who held no interest for her, culling
the extent of their corruption. She was very good at what she did and while she had
never warmed to the job, she’d easily done it to please Pop…
Before Shade…
Her time with Shade had been life altering. He’d taught her to love beyond what
she had ever expected was possible. He’d shown her there was a different way to live, if
only she would choose it.
Choose him.
Then, before she’d even had her chance, he’d been ripped from her so cruelly,
yet his influence stayed with her even as her memories of their short time together
faded. She was doing her job because she knew nothing else. Had no one else. But for
how long? She slid a hand down to her stomach, to the reminder of what they’d shared.
What they’d made together. Before leaving this earth, Shade had insisted their
daughter’s name would be Maeve. Nuala would soon have another job, one that would
involve her heart. But she didn’t know how to be a mother, didn’t want to emulate her
own progenitor. Beatrix Morel Lazare had favored her brother Nik, of course, but she
hadn’t been a loving parent to either of her children.
“Nuala, good to see you.”
Starting, she flipped around to meet the caution in familiar light brown eyes.
“Ethan.” For a moment, she’d forced him out of mind. Now she tried to read him and
was surprised it wasn’t quite as easy as she’d expected, so she had to ask, “What
brings you here?”
“I’m looking for Luc.”
“He’s rarely here this early. Perhaps you ought to call him and make an
appointment away from the casino.” She wanted him to leave, and leave now.
He appeared to think about it before saying, “No, considering the circumstances,
the casino is without doubt appropriate.”
Nuala couldn’t help but bristle. “Then perhaps you can wait upstairs until Luc
arrives.”
“Actually, I also need to talk to you.”
Need? He needed? “We have nothing to discuss.”
Even as she said it, she thought Shade would disagree…
Her chest tightened and she could hardly breathe. She stood there stupidly
staring at him.
He asked, “Can we talk someplace quiet for a few minutes?”
No doubt the raucous music made by the slot machines hurt his human ears. “I’m
fine right here.” And he could just go. Unless…. “Does this have something to do with
Shade’s death?”
“In a way, yes. He would want me to make sure you’re all right, Nuala. To make
sure you and the baby are being well taken care of.”
Cold anger seeped through her. “The same way you took care of Shade? Letting
him be murdered?”
She didn’t miss the guilt that passed through his features. She read him and
caught her breath when it came at her in waves.
But he said, “If I had understood what Shade had gotten himself into, maybe he
would still be here with you.”
“So, you’re saying he didn’t trust you.”
“Only that convincing someone else of what he’d learned wouldn’t be easy
without proof. How many people in this city even know the Kindred exist?”
Nuala indicated the gamblers who were well on their way to being corrupted
forever. “More every day.”
“I see.” Ethan looked around at the humans, then back to her. “One of the
reasons I want to talk. Someplace quiet?” he said again.
While her stubborn streak wanted to deny him, Ethan wasn’t going to give up so

easily. And now they were drawing attention. One of the waitresses gave Nuala a
questioning look as she passed them, and a security guard on his rounds stopped
within a yard of them, his gaze glued to Ethan. She didn’t need everyone knowing her
business.
“Fine,” she said. “The bar is practically empty at this time in the morning.”
“You’re not thinking of having a drink in your condition?”
“Of course I am.” Nuala choked back a more scathing reply, told the security
guard where to find her if her whale appeared, then swept away from the man who
seemed too intent for her liking.