You are here: Products Angels of Zion (Book 2 of Off The Ways Duology) by L. Salt 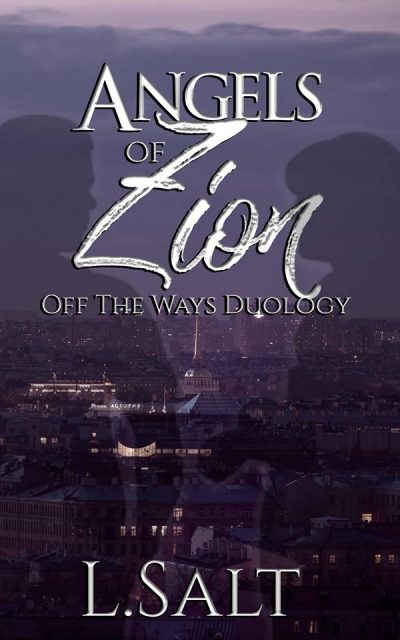 Angels of Zion (Book 2 of Off The Ways Duology) by L. Salt

Three years have passed since Laura Danco and her friends left St. Petersburg. Isaac and Dr. Levit continue to work together on their top secret project Angels of Zion. The main purpose being to create an army of ultimate soldiers—the kainomorphs—the clones whose physical abilities and strength exceeds humans.
When the project goes out of control, one of the kainomorphs goes rogue, Dr. Levit is attacked and subsequently dies, Isaac and Miri have no choice, but to follow the clues that the scientist left them to find the rogue clone and to stop a catastrophe. The investigation brings them back to St. Petersburg, where they meet Laura and Chris.
Daniel Polanskiy disappears without a trace. The friends suspect his life can be of an interest to many parties. With their own lives at stake, they should decide whether great victories require great sacrifices.

L. Salt is a multi-genre author from the United Kingdom. She studied History of World Culture and earned her Master’s Degree in Art Expertise at the St. Petersburg University of Culture and Arts. Born in Belarus, she lived for many years in Ukraine and Russia and, eventually, settled in the North of England, where she currently lives with her husband. Salt’s interest in writing dates back to her teenage years. Apart from creative writing, she has a passion for traveling, arts, history, and foreign languages.

Her debut novella, His Personal Reich was released in April 2018 by Crazy Ink Publishing. It will also be featured in the boxed set Chills and Thrills in May 2019. Her second novella, a thriller/mystery story Legacy of the Iron Eagle, released in February 2019. She is the author of the Off the Ways Series including The Ways We Follow (Book One) and Angels of Zion (Book Two). Her short stories have appeared in numerous anthologies, including the Crazy Ink Publishing anthologies Royal Scoundrels and Beyond Wonderland, as well as magazines, both online, and in print.

Angels of Zion is a sci-fi/romantic suspense story. It’s a second book of Off The Ways duology. Its prequel, The Ways We Follow, was published in June, and Angels of Zion follows it.

The Ways We Follow is a romantic suspense/urban drama with the plot set in the near future in St. Petersburg (Russia). It is inspired by my life in Russian second largest city. Although the story is 100% fictional and its plot set in the future, I want to show how real Russia looks like, destroying all clishes some people associate with this country. The Ways We Follow is a story of Laura Danco, a young talented designer and her best friends who are searching for their ways of life, love, and freedom in the hash reality of the totalitarian society.

Angels of Zion, with the plot set in St. Petersburg and Israel, follows Laura Danco and her friends’ adventures. This time, Laura’s best friends, Dr. Isaac Ridenberg and Miri Shtelman, are in the centre of the story. Isaac is in charge of the top secret project Angels of Zion. The main purpose being to create an army of ultimate soldiers—the kainomorphs—the clones whose physical abilities and strength exceeds humans.
When the whole project goes out of control, Isaac and Miri need to go back to St. Petersburg to find the rogue kainomorph and to save their friends.

My inspiration behind Angels of Zion is my interest in Judaism and culture of Israel. I was always fascinated by the Holy Land and its long and dramatic history. I’ve been learning Hebrew for a short period of six months before I moved to the UK. I want to visit this amazing country one day.

‘How did your visit go?’ Isaac was quick to find out what happened as soon as everybody had gathered in the living room.
‘The house is massive, the garden is a dreamscape, Denis’s new boyfriend looks like an angel from an ancient Byzantine icon,’ Chris started sarcastically. ‘Laura has been absolutely mesmerized.’ She nodded to her friend. ‘Haven’t you, darling?’
‘I’m very happy for Mr. Osipov, but it’s not what I want to hear.’ Isaac grimaced. ‘At least, my long prologue may justify Laura’s actions.’ With that said, she turned to Laura who almost choked on her tea. Isaac shot her an anxious look, but Miri touched his sleeve, preventing a new wave of aggression. Laura bowed her head and told them everything that had happened. ‘I don’t want to believe death is the only option,’ she added at the end. ‘Besides, Denis wouldn’t have agreed to help us if we hadn’t given him an option for survival.’ ‘I’ve provided you with the spy program; I’ve done everything I could. I thought you would be more inventive and make him help us without involving me.’ Isaac only frowned. ‘There are about one hundred members of the scheme. Most likely, all of them take Kainolirium,’ Laura protested. ‘There must be something that could save them.’ ‘Even if we could treat Kainolirium side effects, it may take years. I don’t know how much time these people have. I don’t have enough information, enough resources, here in St. Petersburg. All these patients should go to Israel, only there could we potentially treat them.’
A call on Laura’s Surface interrupted his explanations.
‘Oh, it’s Andreas,’ she mumbled. ‘Sorry, guys. I really need to take this call.’ The next moment, she disappeared behind the glass door of Daniel’s study. ‘Who’s Andreas?’ Isaac asked. ‘Andreas Polanskiy is Daniel’s older brother.’ Chris shrugged, as if it should’ve been a well-known fact. ‘He lives in Moscow but, according to Laura, the two brothers are very close.’ ‘What else do you know about him?’ Miri swallowed her drink nervously. ‘Nothing much. He’s much older than Daniel and has no kids, so I think he’s a bit worried now why Daniel hasn’t contacted him for so long. He’s a bit overprotective. Or I’ve been told so by Laura. By the way, why don’t you want to ask her yourself?’ ‘It seems we don’t need to,’ Isaac replied instead. ‘Miri, it looks like we’ve found our client.’ ‘A client?’ ‘Of course.’ Miri nodded. ‘Sibling love is sacrificial. They wouldn’t hesitate to break the law to save each other. They wouldn’t hesitate to break everybody. Would they, Chris?’

Be the first to review “Angels of Zion (Book 2 of Off The Ways Duology) by L. Salt” Cancel reply