You are here: Products Angelique Rising by Lorain O’Neil 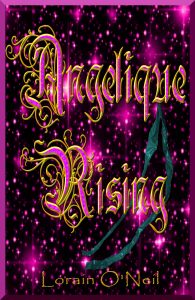 [Wicked Warning: Though a love story with a positive ending, this novel does contain a bit of dark and sexual content.]

She’s old. Alone. It’s time to swallow the pills and be done.

And that’s what she does, happily discovering there IS life after death –as a spirit! A spirit who has a pretty grand time of it traveling about until the day she comes across Angelique, a motionless eleven year old girl doctors are feverishly trying to resuscitate. Foolishly she tries to help. Whoosh! In one Great Cosmic Fluke, the child’s departed and she’s there instead. Back on Earth and in Angelique’s body!

One rocky path later, Angelique’s grown and performing uneasily at the Wyatt T. Cochran Employee Appreciation Gala trying to dodge the suspiciously intrigued Wyatt T. Cochran himself. But Wyatt isn’t the only man attracted to Angelique’s glittering uncanny talents, dark miscreants are too… the ones who want to feast.

And from a much loftier height something else is watching the vulnerable wayward little angel as well, something that has mighty unexpected intentions for Angelique and Wyatt T.

Because when a Great Cosmic Fluke occurs, the Cosmos can have one barmy sense of humor.