You are here: Products And There I Found You: Four Short Love Stories by Kelly Zientek 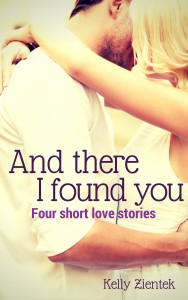 And There I Found You: Four Short Love Stories by Kelly Zientek

His greatest anguish is to be separated from his heart's desire.

When Caleb refuses a vengeful goddess, she banishes his wife from the bonds of time, and Caleb must find his wife somewhere across the centuries before remaining drops of youthful potion run out and he must promise himself to the goddess for eternity. That's just the start of it in this collection, which opens with Caleb in “The Thirteenth Door.”

In the next story, “The Lost Princess,” an ancient Egyptian princess awakens, looking into the eyes of her unrequited lover. There are only two small problems: Her spirit is stuck inside her mummy in a museum exhibit, and her lover does not recognize that she is awake.

“Mizuki's Den of Dreams” takes us down a darker path, one in which Alice Hannigan can have the love and happiness she's always longed for… with one horrifying catch.

This collection ends with the achingly wistful “Requiem for an Immortal,” drawing us up to the great beyond where a woman's soul mate prepares for his journey to the love they will share in mortal life.

Kelly Zientek has reported, volunteered, studied, edited, and taught in Alaska, New Jersey, France, Ohio, and California. She now lives, works, and writes fiction in North Carolina. Her short stories have appeared in “The Broken Plate Review,” “The MacGuffin,” “Cactus Heart,” and online at “Bewildering Stories.”

Love is a powerful, driving force, and I wanted to explore through these four stories both its redemptive and destructive powers.

Be the first to review “And There I Found You: Four Short Love Stories by Kelly Zientek” Cancel reply