You are here: Products And Never Let Her Go by Nancy Glynn 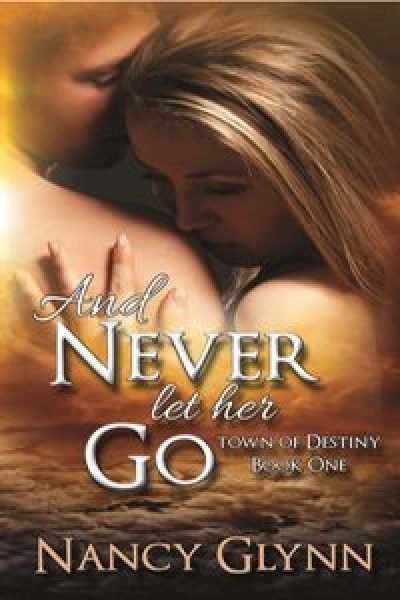 And Never Let Her Go by Nancy Glynn

Eight years ago, Erin Donahue had it all—her own city apartment, a career in photography, and a man who’d do anything for her. But things change. Fate steps in. Now, living in the small town of Destiny, IL, Erin embraces her new life, free of hurting anyone else. She’s all alone, and she likes it like that. Independent, strong…and broken. Until a handsome, divorced rancher drives up her lane and drags her back into a past she wants to forget.

A forbidden crush born long ago…

In Afghanistan, Slade Callahan tucks Erin into his dreams and his heart. Guilt plagues him for wanting her when she isn’t his to want. She belongs to his older brother. But when Erin breaks his brother’s heart, she never realizes she’s breaking two. Honor keeps him from going after her. Discharged from the Marines, Slade moves on with his life and lets her go. Until tragedy strikes. His brother is dead. Found in his car with two letters…one to his wife—and one to Erin.

A letter full of hope and secrets…

Erin and Slade come together, fighting a love that won’t let go. Tormented by guilt, shame, anger, and the need to forgive, walls slowly crumble. Setting off a firestorm of buried passions, they embrace the truth in the stars. But their journey is only beginning when the letter is read. Decisions must be made. Is Erin strong enough to accept herself and trust in this beautiful love, or will she repeat history with another Callahan man?

Nancy Glynn was born and raised in Chicago, Illinois, the setting for all her stories. She loves creating worlds with a great love story, be it in a supernatural or contemporary romance setting. She has written the Golden Hills Legacy series (Black 21 and Lana’s Calling) and now Town of Destiny series, And Never Let Her Go starting it off. Her love for reading and writing began early and has grown into a passion. It was on her cold kitchen floor where she first wrote a short story called “When Boy and Girl Become Man and Woman,” her first written love scene; she was only 15. She devoured any novel she could get her hands on from 13 on, graduating from Sweet Valley High books to Adult novels.

I wanted to show that everyone deserves love. We all make mistakes and aren’t perfect, so wanting to get that out there and spread that message is what drove me to write this love story.

His face softened as his gaze roamed over to the desk. “Please, Erin? Please…”
For a long moment, she stared at him and briefly closed her eyes. “Fine, but will you do me a favor before I do?”
He narrowed his eyes. “What is this—you’ll scratch my back type of thing?”
She stood and peered out the window, her back to him. “I gave you a week and you’re changing the game, so I think I have a right.” She turned and faced him. “I can always stick to the week plan.” She stared back with equal intensity, studying his poker face. Not one blink.
The pause was excruciating. Would he take her up on it? Guilt eroded her for putting him in such a position, and wanted to extract her emotional extortion.
When she decided to do just that, he gave a resigned sigh. “Fine. What is it? Want me to speak to your plants? Are they mad at you?” A small smile cracked his dimple open. She never noticed that before.
“Ha-ha, very funny. No, nothing like that, although that’s very tempting. I think they would like you. But, no.” She placed her hands on her hips and tilted her head. “I need a model.”
He spat out the coffee. “You’re joking, right?”
“If you knew me well, you’d know I don’t joke. Like ever.” A small grin worked her lips.
“What about the plant joke?”
“I wasn’t joking.”
“And I’m the insane one here?”
She waited, cocking a brow.
Slade let out a disgruntled sigh. “A model? What exactly do I need to do?” He wiped his shirt of the splashed coffee.
“Good decision. Since it’s raining hard out there, I need a few pictures for my stock photo account. I’m contracted to send in at least ten a week. Do you happen to have a cowboy hat with you?”
He stared at her.
She laughed. “Never mind. I’ll make do. Okay, go into my bathroom and brush your…on second thought, leave it. It has that messy look that women swoon over. An author just might use it.”
“Wait—you’re saying my face could be on some romance novel?”
She sat back down next to him. “Yes. You could be famous.” She grinned.
He shook his head. “No way. That’s embarrassing. I’m a rancher, not Fabio.”
“So…the deal’s off? Okay, see you next week then.” She started to stand.
He stood and paced back and forth before stopping. “Fine, but I’m not taking my shirt off.”
“I would never ask such a thing. Keep it buttoned all the way up to your chin. The ladies love that look. Dull and conservative.”
“I can never tell when you’re serious.” He brushed his fingers through his hair, shaking the remaining droplets from it. “I feel so used,” he said, trying to hide a grin she could see wanted to come out. “I’m not the model type.”
“I’ll be the judge of that.” She walked to her desk and picked up her camera, wrapping it around her neck. Then she went into her music folder on her phone, which was connected to her speakers, and chose a pop dance song. “That’s better.” She walked to the fireplace to stoke the flames. “Okay, I want you to stand over here with your hand kind of like this,” she said, instructing him.
He rolled his eyes and followed her to the hearth. “I can’t believe I’m doing this. I’m not even that good-looking.”
“Just get over there and look pretty.” She flashed a smile and batted her lashes.
Saluting her, he did as he was told and turned toward her. “Like this?” He imitated her pose.
“More like this,” she said, pulling his hand over the mantle, touching his long, calloused fingers. She snatched her hand back and stepped away. “There you go. Now stay put.”
“Anything to get you to open that letter.”
“Shhhh.” She backed up and looked through the viewfinder. “Perfect.”
“Do you want me to smile or what do I do? Erin?”
But she found herself staring at him before she started shooting. “No, you’re fine like that. I’ll tell you when I need more.” There was something natural about his easy movements. At times, he was a little clunky, but then he’d move his hip just so, his hands just right, and a look in his eyes that held hers. It was poetic without him even trying.
After a few shots in that position, she dropped her camera to her chest. “Okay, try sitting on the hearth but at the corner, next to the Clearview. Perfect. Give a little smile, nothing too big, just a hint like you’re up to no good.”
He gave her a dry look, raising his brow. “Really?”
“Really. Oh, hang on—I’ll be right back.” She dashed to her bedroom and came back with her novel. “See this guy? That’s Buck. And that’s what I want.”
“Seriously? He looks so cheesy. Buck, huh?”
“Just do it…please?” She kept herself from exploding with laughter at how serious he was. If he even thought she was laughing at him, he’d give up. She needed these.
“This is what women want?”
“Yes.”
“His shirt is open.”
“Yes.”
“I’m not doing that.”
“Okay, don’t. Just smile like him.”
“Is this your fantasy man?”
She snickered. “I don’t have a fantasy man. I have Sally and my plants. That’s all I need, but he does make for an exciting evening in bed.”
Grinning, he raised his brows.
Her eyes widened. “I mean reading.”
He laughed. “Who’s Sally?”
“My camera.”
“Now, I’ve heard it all.”