You are here: Products An Undying Remembrance by Eliza Beth 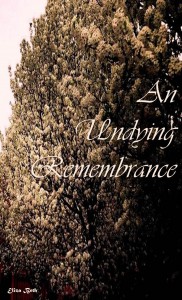 An Undying Remembrance by Eliza Beth

Neil, Adam and Liam Mather grew up adoring their next door neighbor Samara Bentsen. She was the light of their eyes, and each one of them knew one day they would all create a life together. However, on the eve of moving in together Samara disappeared.

Two and a half years later, Samara reenters their life, but she’s not the same. She doesn’t remember much of her past, and male figures tend to send her into a panic. Will the Mather brothers be able to build a new relationship with their princess, or will all be destroyed when the very men responsible for taking Samara seek revenge?

That’s about how interesting my life gets, oh except for the little tidbit of graduating college in a few short months!