You are here: Products AN OBSESSIVE LOVE by YVONNE CROWE 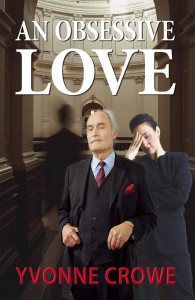 AN OBSESSIVE LOVE by YVONNE CROWE

This compelling story of pain and betrayal takes many twists and turns until it erupts into a shattering climax. “Driven by Lust” treads a middle ground between romance, corporate thriller, and social critique. Good, provocative read. Oleg Medvedkov Best selling Author of Dragon Who Loved Water Lilies and Other Funny Stories.

Anyone who has ever been exposed to the fallout fromSuicide should read this book.

The evil that men do lives on after them – William Shakespeare.”This is a chance in a million Elin. All relationships are a tradeoff. Why should you be any different?”

Should Elin heed the words of the psychotherapist?

What promises does Jonas, the older multi-millionaire make to Elin as he pursues her relentlessly?

Obsessed with younger women, sex and money, he sees all are within his grasp if he can persuade her to marry him. .

Is Guy, her younger, wealthier lover who hovers in the background, a threat to Jonas?

Beset by insecurities and the fear of losing her, Jonas spins his web to ensnare Elin in the ever tightening sticky fibrous strands that inexorably bind her to him as she struggles to overcome her past. As the skeletons come clattering out of the closet, this powerful story lays bare the frailty of doomed relationships.

What is the Secret of the Deed?

Who accuses Elin of murder and how will she save herself?

This compelling story of pain and betrayal takes many twists and turns until it erupts into a shattering climax.

Readers of Helen Cooper and Sylvia Day will thoroughly enjoy this book.

Currently I teach English to Muslim immigrants from Iraq. Both of these experiences were so enlightening, giving me an insight into the spirit and courage these people, whom I admire tremendously and respect, portray in their everyday lives and their story is so compelling I will be writing a novel about their lives

This is taken from a true story.