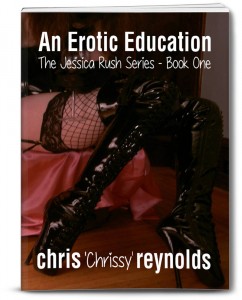 A year after separating from his wife, Chris has the good fortune to meet a beautiful up and coming author named Jessica. He’s taken by her in more ways than one. She extends an invitation for him to learn and help teach a course based on the topic of her latest book called Inspired Touch. He soon finds himself in a new world where it’s okay for Chris to be Chrissy.

Jessica and Chris begin a romantic relationship that leads Chris to embrace his natural submissive desires.

The experiences he has force him to view himself and his life in a different way, exploring forced feminization, crossdressing, bondage and discipline at the hands of an exceptional domme.

The waiter took our order and as he left, she said: “It seems that we have some time right now, why waste it?” She reached out and took my hands across the table. We simply held hands for a while and as we looked at each other, I felt a strong connection to her.
I also felt like I needed to know her better and I feared that somehow I’d screw it up.
I don’t know how she knew, but she looked at me and said, “Don’t think about anything else but being here now.” My spirit lightened a bit and I began massaging her wrist and arm.
She asked me about several of the articles I wrote. She complemented me. She said that they inspired her to dig deeper into her own research. I felt warm inside. I shared with her that I always believed in my work.
I always believed that it somehow mattered. Maybe it informed, inspired and impacted the lives of people in a positive way. That steadfast belief got me through some of my most difficult days.
“That’s something we agree on. Actually, I think that a lot of writers feel that way.”
“You know, you have a great touch.”
That made me feel even warmer inside.
I so enjoy touch and it’s been so absent in my life for the last I don’t know how many years.
“That’s a shame.”
Our food came out and shortly, I didn’t feel warm anymore, I felt like my head was on fire. It was a bit spicier than I usually do. I told the waiter to bring another mango lassi.
I made a few references to what Jessica wrote in her book. We talked about inspired touch, what it means to her and how important it is. I felt as though we could talk about anything. Nothing was off limits.
What a wonderful evening. I enjoy your company so much.
“It doesn’t have to end here.”
I wasn’t expecting that.
“I have a really nice hotel room, come spend the night with me. My flight doesn’t leave until two, tomorrow afternoon.”
I smiled an uncertain smile and said okay.
We picked up a bottle of wine and she wasn’t kidding, they put her up at the Regal Plaza. It was a five star hotel on the parkway. Her room was incredible. It was bigger than my whole apartment. I guess her publisher thinks she’s a safe bet.
We got right down to it. We slowly started to strip each other naked. I stopped as I realized something. I pulled away as she was about to pull my pants down.
She looked at me and I told her there’s something I didn’t share and I don’t know what she’d think about it. She reached forward again and started to pull my pants down revealing black satin panties.
She didn’t look surprised… she smiled.